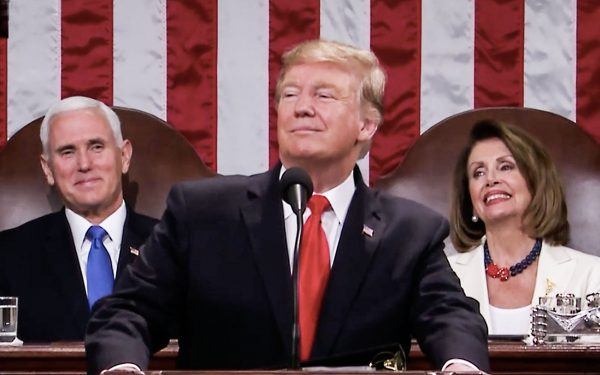 President Donald Trump “unified” Americans with his State of the Union (SOTU) address by “pulling off the mask of some of these naysayers and negativity purveyors” in the Democratic Party, Fox News host Laura Ingraham said Wednesday night on “The Ingraham Angle.”

Trump delivered a gracious message of unity and “opportunity” during his speech before Congress and the nation on Tuesday night.

“The agenda I will lay out this evening is not a Republican agenda or a Democrat agenda. It’s the agenda of the American people,” Trump said. “There is a new opportunity in American politics, if only we have the courage, together, to seize it.”

Trump earned some applause from congressional Democrats — most notably when he offered a nod toward the historic number of women elected to Congress in 2018.

But too many Democrats refused to acknowledge the nation’s many successes under the Trump administration and refused to stand and applaud issues that should be bipartisan.

“Last night the president did something few expected: He attempted to unify the country. He was even magnanimous toward his most hostile critics, giving the ghost gals — the throng of white-suited lefties [1] — their due,” Ingraham said, noting that the Democratic women wore white to honor the suffragettes.

“What the State of the Union did was remind the American people of how much good the president has done over the last two years — he’s not perfect, but he’s done a lot of good things,” Ingraham said.

Yet Trump’s SOTU speech “vividly revealed the contrast between his vibrant policies that are very clear and the pale, colorless agenda of the Left,” Ingraham noted.

The Democrats are now the party of “infanticide, open borders, drug legalization, racializing politics,” the “Green agenda and, for some, socialism,” Ingraham said. “The president may not have united Congress last night. But he unified many, I think, out there watching — the American people — by kind of pulling off the mask of some of these naysayers and negativity purveyors, the Democratic Party today, during that speech.”

The Democrats oppose the president’s “common sense” policies, and liberals’ “petulance and the nastiness” will be “remembered well into 2020,” the Fox News host observed.

“They wouldn’t even cheer when the president was talking about how unemployment for African-Americans, Hispanics, is at an all-time low … They wouldn’t applaud for that because of the bitterness of not being able to acknowledge that Donald Trump has led the economy in a good direction,” Fleischer said.

“He’s never had a chance with these Democrats no matter what he does,” he added.

Ingraham lamented that the Democrats “snapped” the “olive branch” that Trump extended to them.

“They hate the president more than they love the country. You could see it … as far as the applause, the bitterness, the anger, the hatred — since Election Day,” Bossie said. “They have nothing else but to try to damage him because it’s all politics to them. It’s not about helping Americans.”

“What was the president’s sound bite last night? ‘You were born free and will remain free as U.S. citizens.’ What was the snapshot for the Democrats? Sitting on their hands while he was talking about preventing the late-term death and destruction of infant children form the womb,” Bongino said. “That’s a snapshot I don’t think the Democrats really want.”