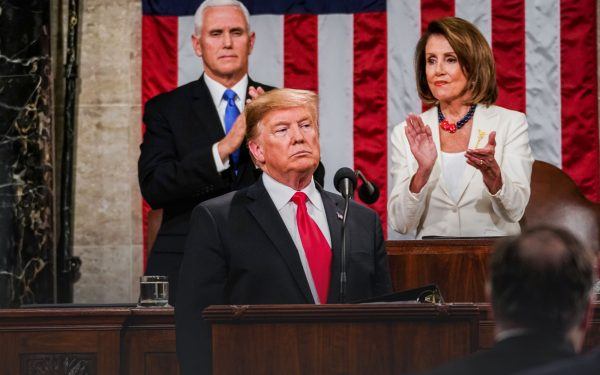 President Donald Trump on Tuesday night urged both political parties to “join forces” and confront the “urgent national crisis” of illegal immigration streaming through the open portions of the U.S.-Mexico border during his State of the Union address.

The government, which partially shut down on December 22 after Democrats refused to give the president the necessary $5.7 billion in border wall funding, reopened on January 25 without the wall funding.

The short-term deal will fund the government until February 15.

“Now Republicans and Democrats must join forces again to confront an urgent national crisis. Congress has 10 days left to pass a bill that will fund our government, protect our homeland and secure our very dangerous southern border,” Trump said.

The president asked Congress on Tuesday to put politics aside and work with him to secure the southern border.

“Not one more American life should be lost because our nation failed to control its very dangerous border,” Trump declared.

“Now is the time for Congress to show the world that America is committed to ending illegal immigration and putting the ruthless coyotes, cartels, drug dealers and human traffickers out of business,” the president added.

Trump argued that securing the border and protecting U.S. citizens is “a moral issue” because “the lawless state of our souther border is a threat to the safety, security and financial well-being of all Americans.”

Congress has a “moral duty” to establish an immigration system “that protects the lives and jobs of our citizens,” the president reminded lawmakers.

“I want people to come into our country in the largest numbers ever. But they have to come in legally,” he emphasized.

But when Trump mentioned the dangers that migrant caravans barreling toward the U.S. pose to the nation, many Democratic lawmakers audibly groaned.

And very few Democrats applauded Trump’s calls for border security and the protection of U.S. citizens.

“Tonight I am asking you to defend our very dangerous southern border out of love and devotion to our fellow citizens and to our country,” Trump said. “Tolerance for illegal immigration is not compassionate. It is actually very cruel.”

Trump also introduced three of his guests to all those watching and listening: Debra Bissell, Heather Armstrong and Madison Armstrong. They are the family members of Gerald and Sharon David of Reno, Nevada, whom an illegal immigrant killed in January — just mere weeks ago.