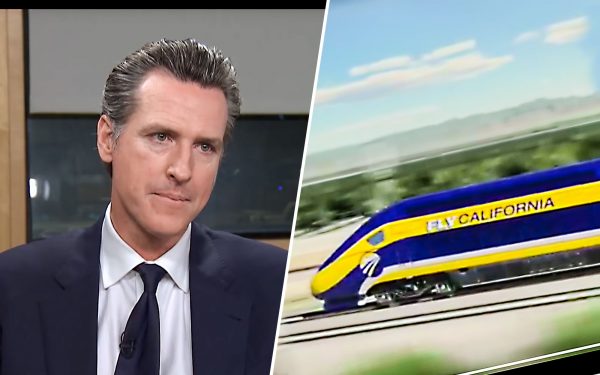 The Trump administration announced on Tuesday that it is exploring “every legal option” to reclaim $2.5 billion in federal funds spent by California on its now-defunct high-speed rail project, and also that it intends to cancel $928 million in federal grants not yet paid for the project to link Los Angeles and the San Francisco Bay Area.

The move was a dramatic escalation in the ongoing war of words and policy between California and the White House. California Gov. Gavin Newsom, a Democrat (shown above), declared during his State of the State address last week [1] that he was shelving plans for the $77 billion rail project that had been championed by environmental groups, admitting that “as currently planned, [it] would cost too much and take too long.”

In response to the Trump administration’s legal threat Tuesday, Newsom vowed that he would not sit “idly by” as the White House engaged in what he called “political retribution” against California.

In a letter, the U.S. Department of Transportation and Federal Railroad Administration (FRA) Administrator Ronald Batory said Newsom’s State of the State address constituted a “significant retreat from the State’s initial vision and commitment and frustrates the purpose for which federal funding was awarded (i.e., an initial investment in the larger high-speed rail system.”

Batory, writing to the California HSR Authority (CHSRA), also charged that the state had “materially failed to comply” with its agreement to contribute substantial matching funding to the project in recent months. For example, Batory noted, California pledged to spend $141.8 million to “advance final design and construction activities” on the high-speed rail network in December 2018 but ended up recording only $47.9 million in expenditures.

Additionally, the letter pointed out that the project would not have been completed by 2022, when the state agreed to complete the work.

Related: California’s Governor Set to Pull Out Troops from Border in Apparent Rebuff to Trump [2]

The agreement’s termination is set to take effect March 5, although Batory offered California officials an opportunity to dispute the government’s findings.

The high-speed rail has been seen as a beleaguered and problematic project for years. According to a timeline created by Citizens Against Government Waste (CAGW), California voters in 2008 “first approved $9.95 billion in bonds for a first in the nation, 800-mile high-speed rail project with an initial cost estimate of $35 billion, to be completed by 2020.”

By 2014, construction still had not begun, but in his State of the State address, then-Gov. Jerry Brown, a Democrat, “ad-libbed [a] summary of the Little Engine That Could, rhythmically chanting its signature line, ‘I think I can,’ four times.”

In 2017, the Orange County Register wrote: “More time-consuming and tens of billions of dollars more expensive than estimated when California voters approved the funding measure in 2008.”

Finally, Newsom announced this month, “Let’s be real. The current project, as planned, would cost too much and respectfully take too long. There’s been too little oversight and not enough transparency.”

Republican lawmakers in the Golden State responded to Newsom’s pullout from the project last week by calling for a referendum vote on Newsom’s plan to build a much shorter, 171-mile railway through the state’s Central Valley.

The constant delays and overspending has made California Democrats a prime target for the White House.

On Tuesday, Trump mocked California for joining 15 other states in suing the administration over its recent emergency declaration — and added a jab about the rail project. (The $77 billion project would dwarf the cost of a wall at the border — estimated to be $20-25 billion.)

“As I predicted, 16 states, led mostly by Open Border Democrats and the Radical Left, [3] have filed a lawsuit in, of course, the 9th Circuit! California, the state that has wasted billions of dollars on their out-of-control Fast Train, with no hope of completion, seems in charge!” he tweeted.

The president added, “The failed Fast Train project in California, where the cost overruns are becoming world record setting, is hundreds of times more expensive than the desperately needed wall!”

Last week, Trump and Newsom publicly sparred over the governor’s sudden withdrawal from the pact to build the rail network.

In a tweet, Trump wrote: “California has been forced to cancel the massive bullet train project after having spent and wasted many billions of dollars. They owe the Federal Government three and a half billion dollars. We want that money back now. Whole project is a ‘green’ disaster!”

California has been forced to cancel the massive bullet train project after having spent and wasted many billions of dollars. They owe the Federal Government three and a half billion dollars. We want that money back now. Whole project is a “green” disaster!

“Fake news,” Newsom wrote. “We’re building high-speed rail, connecting the Central Valley and beyond. This is CA’s money, allocated by Congress for this project. We’re not giving it back. The train is leaving the station — better get on board! (Also, desperately searching for some wall $$??)”

In a statement, CAGW President Tom Schatz said there were larger lessons to be learned from the debacle.

“California’s high-speed rail fantasy quickly became a train to nowhere at taxpayer expense,” Schatz said. “This failed boondoggle should be taken as a giant red stop sign for any politician who supports the Green New Dea’ and its equally farcical promise of ending air travel by forcing taxpayers to pay for a California-style rail system across the entire nation.”

Gregg Re is an editor for Fox News. Fox News’ Kelly Chernenkoff, Adam Shaw, Frank Miles and Andrew O’Reilly contributed to this Fox News [5] report, which is used by permission.