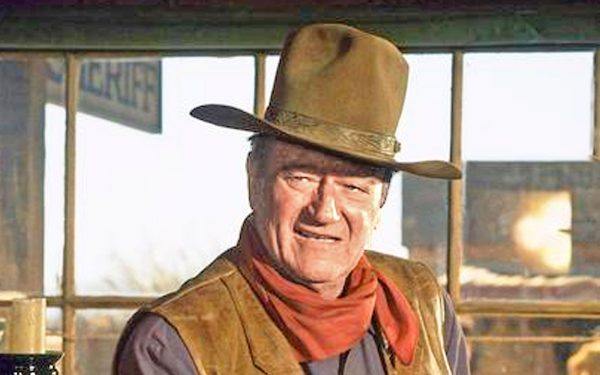 John Wayne may have died in 1979 — but he’s currently the subject of many liberals’ frustrations.

A 1971 Playboy interview with the movie star has been going viral online, mainly thanks to comments that Wayne made about race.

“We can’t all of a sudden get down on our knees and turn everything over to the leadership of blacks,” Wayne said at one point in the interview when asked about Angela Davis, an activist who worked briefly with the Black Panthers and Communist Party USA during the American civil rights movement.

Wayne also went on to defend the treatment of Native-Americans in the United States.

“There were great numbers of people who needed new land, and the Indians were selfishly trying to keep it for themselves,” the “Searchers” star said.

Though this Playboy interview has been accessible for decades, some people on social media are acting as if it dropped yesterday.

“John Wayne was a straight-up piece of s***,” another said.

I am shocked that John Wayne, who was born in 1907 (!) made some un-progressive remarks in 1971. Just shocked. This is me being shocked. pic.twitter.com/MswXTGXRZA [3]

Yet another responded, “It doesn’t matter if John Wayne has been dead for 40 years. This kind of hate speech has no place in our society. Please retweet so that as many people as possible can read it.”

The last response is particularly interesting, since the user said it didn’t matter that Wayne has been dead for 40 years.

Actually, it does matter.

The anger over this interview shows a particular softness and sense of first-world privilege that runs rampant through this country’s easily offended.

Why is this worth a dust-up all these years later on social media? What good does it do to dig up old commentary and evaluate it by today’s standards?

Related: The 20 Best John Wayne Lines in Film of All Time [5]

To say he was of another time is the understatement of the year.

Yet we have somehow reached the point where snowflakes in 2019 are so offended by so much that they have to run far back into the past to find more fuel for their faux outrage.