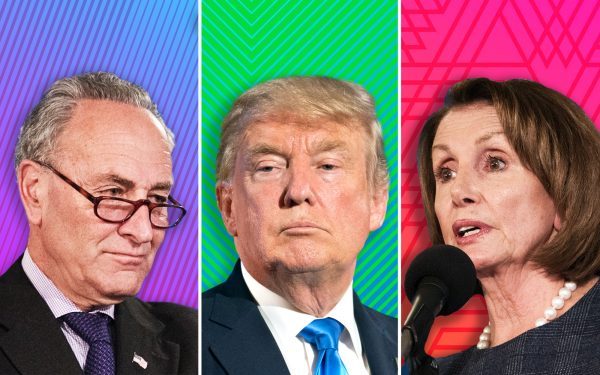 Senators voted to pass a budget compromise on Thursday within a day of its release in a major step toward averting another government shutdown.

The government has been reopened for several weeks but another shutdown lies on the horizon if the bill does not pass. The short-term spending bill that ended the recent shutdown only gave congressional negotiators three weeks to reach a compromise, [1] with border security being the pivotal sticking point.

The Senate voted 83 to 16 for the proposal the committee created.

The conference committee tasked with reaching a compromise released a deal that provides $22.54 billion in total border security funding. That includes $1.375 billion for 55 new miles of physical barriers along the southwest border.

President Donald Trump had demanded a lot more money [1] for the construction of a southern border security wall at $5.7 billion.

The House still needs to pass the proposal next; and then President Donald Trump will have to decide whether to sign it. The bipartisan spending package also funds remaining parts of the federal government through the fiscal year at $333 billion. The government wasn’t fully funded when the debate over border security derailed the budget process late last year.

“We knew that if the conference committee was allowed to work they can bring us together,” Senate Minority Leader Chuck Schumer (D-N.Y.) said from the Senate floor hours before the vote. “The agreement is a reasonable compromise. It provides additional funding for smart and effective border security. It does not fund the president’s wall but it does fund smart border security initiates that both parties have always supported including increased security at our ports of entry and humanitarian assistance at the southern border.”

Related: McConnell Hopes Trump Will Back Imperfect Deal to Avert Another Gov’t Shutdown [3]

Speaker of the House Nancy Pelosi (D-Calif.) and Schumer led the opposition against the president throughout the recent government shutdown. They repeatedly said they were unwilling to negotiate on border security until the president reopened the government. They have continued to oppose the border wall since the government’s reopening.

“The product of this work is a compromise no side will view as a perfect deal,” Senate Majority Leader Mitch McConnell (R-Ky.) said from the floor ahead of the vote. “Nevertheless, this is something both sides should view as an important step. And today I hope we’ll vote to advance it. When the Senate votes on the agreement, we’ll be voting to prevent a second possible shutdown and provide the certainty of a fully functioning federal government. We’ll be voting to provide another down payment on the president’s commitment to secure our nation’s borders.”

House Minority Leader Kevin McCarthy (R–Calif.) said Wednesday that negotiators on the Republican side of the conference committee were able to defeat harmful proposals. Democrats, he said, attempted to limit the number of beds they had for detained migrants and considered defunding U.S. Immigration and Customs Enforcement (ICE).

“ICE, if you look at funding, has actually increased,” McCarthy said hours before the finalized deal was unveiled. “So from one perspective, you can’t get everything you requested, you’re going to have to find common ground. So, not everyone is going to be happy with the agreement. But does it put a framework in to make sure we can secure the border. That’s what I’ll be looking for when the language comes out.”

I just talked to the President, and he was in good spirits. I told him that I just signed the homeland security conference report and that it’s a down payment on his border wall. This is only the beginning of a multi-year effort.

Trump initially seemed to reject an unfinished version [5] of the proposal by noting he wasn’t happy with it on Tuesday.

He has continued to express his disappointment with the deal as it was being finalized but said he doesn’t expect another shutdown.

He later said hours before the vote that he was still “reviewing the funding bill” with his “team at the White House.”

McConnell then said closer to the vote that the president is prepared to sign the bill, but that he will also be declaring a state of emergency on the southern border. Trump has floated the idea since the shutdown. The move could possibly allow the president to free up billions [6] in emergency funds for his wall through the National Emergencies Act.

Reviewing the funding bill with my team at the @WhiteHouse [7]!

“I don’t want to see a shutdown,” Trump told reporters on Wednesday during a meeting with Colombian President Ivan Duque.

“A shutdown would be a terrible thing. I think a point was made with the last shutdown. People realized how bad the border is, how unsafe the border is, and I think a lot of good points were made. But we’re going to look at the legislation when it comes, and I’ll make a determination then.”

Trump said late last year he would not sign any more spending bills that did not include border wall funding.

Democratic leaders opposed providing any funding for the wall — which led to the earlier government shutdown on December 22. But the president eventually backed away from his veto threat by signing the short-term bill on January 25.

“This agreement is the last train leaving the station away from another dreaded government shutdown,” Schumer said from the floor on Wednesday. “The last time we were all in this situation the president signaled his support for a government funding bill only to retreat at the last possible moment, precipitating the longest shutdown in our history.”

Trump first heard that a possible deal was reached on Monday night, right before his campaign-style rally in El Paso, Texas. He dedicated a lot of his speech [9] to the issue. He previously stressed the importance of having a border wall for deterring [10] illegal drugs and criminal gangs at press conferences [11] and meetings throughout the shutdown.

McConnell said the deal wasn’t perfect but called it a step in the [3] right direction during a press conference on Tuesday. He said he hoped the president would agree to sign it even though it doesn’t fulfill all of his requests.

Senate Appropriations Committee Chairman Richard Shelby (R-Ala.) was among the party leaders who joined him.