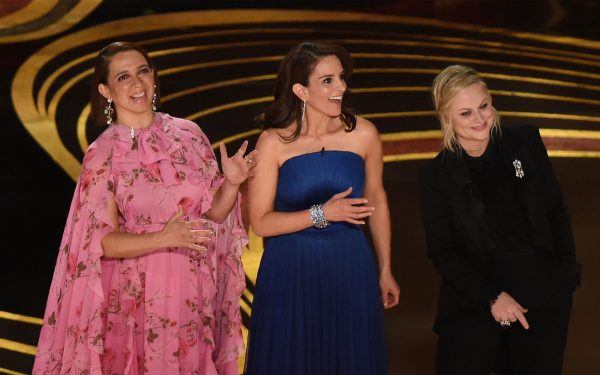 It took mere minutes for celebrities to get political and turn their attention to President Donald Trump at the Oscars [1] on Sunday night.

After a performance by the surviving members of Queen (with “American Idol” star Adam Lambert providing vocals in place of the late Freddy Mercury), actresses Maya Rudolph (above left), Tina Fey (above center) and Amy Poehler (above right) took the stage.

The trio made a handful of jokes about the ceremony having no proper host for the night — after Kevin Hart dropped out following criticism he received for past jokes [2] — and then they got political.

“So just a quick update in case you’re confused. There is no host tonight, there will be no popular movie category — and Mexico is not paying for the wall,” Rudolph said to uproarious applause from the crowd.

The “popular film category” dig was a reference to the fact that the producers of the Academy Awards briefly flirted with the idea of adding the category to the already overlong Oscars ceremony this year.

After immediate backlash, they dropped the idea.

The “Mexico is not paying for the wall” line is, of course, a reference to a promise President Trump made during his 2016 presidential campaign.

Trump has declared a national emergency to help fund the border security wall [3] after congressional Democrats refused to allot the proper amount to the potential border wall protecting this country from a free flow of drugs, gangs and other dangers to America and American citizens.

The statement on Sunday night wasn’t so much a surprise. What was a surprise was how quickly in the night things went political. The response from the crowd also showed how hungry many of these celebrities are for tired jabs at the president of the United States. It’s just sad, especially when one considers that the Oscars ceremony is supposed to be a positive night about celebrating achievement in film.

The response from the crowd also showed how hungry many of these celebrities are for tired jabs at the president of the United States.

A more positive moment from the ceremony came later when actress Regina King took the stage to accept the Academy Award for Best Supporting Actress for the movie “If Beale Street Could Talk.” King used her acceptance speech to highlight the support she receives from her family. She also ended her time on stage by thanking God, not something one often hears in Hollywood, especially these days.

“Mom, I love you so much,” the actress said to her mother, who was sitting in the crowd. “Thank you for teaching me that God … always has been leaning in my direction.”

She then added, “God is good all the time.”

Check out the moment the Oscars went political below: