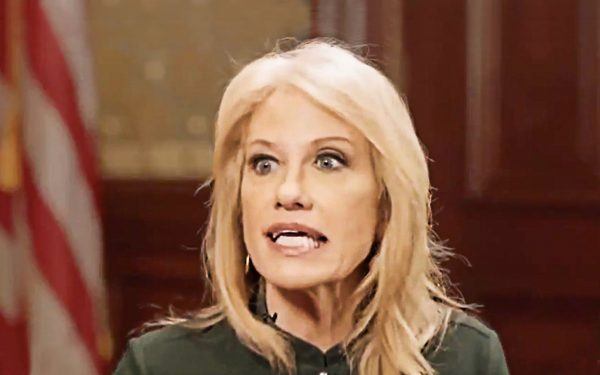 For the first time publicly, White House counselor Kellyanne Conway discussed her alleged assault last year at the hands of an “unhinged” woman during an interview with CNN that aired Friday on “New Day.”

Conway sat down with CNN anchor Dana Bash for her series called, “Badass Women of Washington.”

Conway said she and her daughter were at a restaurant in Maryland on October 18 when the alleged assault took place. The woman involved is 63-year-old Maryland resident Mary Elizabeth Inabinett. The incident took place during the fallout from Supreme Court Justice Brett Kavanaugh’s bitterly partisan confirmation hearings that were derailed by last-minute sexual assault allegations.

“I was assaulted in a restaurant and that person … has to go to court soon,” Conway told Bash.

Conway said she was standing next to her daughter and some of her friends at dinner when she felt someone “grabbing” her from behind.

The person “grabbed my arms and was shaking me to the point where I thought maybe somebody was hugging me — one of the other parents coming to pick up his or her daughter.”

“And then as I turned around, it just felt weird. It felt like, ‘Ah, that’s a little aggressive.’ And I turned around and the woman had grabbed my hand. She was just unhinged,” Conway continued. “She was out of control.”

“And my daughter was right there. And [the woman] ought to pay for that. She ought to pay for that because she has no right to touch anybody,” Conway said. “She put her hands on me. I said, ‘Get your hands off me.’ She put her hands on me, was shaking me, and then was doing it from the front, with my daughter right there, who then videotaped her.”

Conway said for a while the woman “just would not leave the restaurant” and “just wouldn’t stop.”

“This woman thinks it’s OK to touch someone else. It’s not OK. It’s not OK by her own standards and not OK by the law,” Conway said.

Conway told Bash the police arrived at the scene after she called 911. But Inabinett had already left by then.

She said she told President Donald Trump about the incident shortly thereafter. Conway said Trump asked her, ‘Are you OK? Was your daughter OK? Were the other girls OK?'”

The whole ordeal was “tough” on her daughter, Conway said.

“There were other people’s kids there, which is why I didn’t want to talk about it publicly. But I don’t want it to become a thing,” Conway said. “I just wanted it to become a teachable moment for everyone.”

After airing the clip, Bash said on “New Day” that she asked Conway if the president’s “incendiary rhetoric” such as calling the press “the enemy of the people” may have contributed to the woman’s violent actions toward her.

“She shot back by saying, sarcastically, that I violated her challenge to form a sentence without mentioning Donald Trump,” Bash told co-anchor John Berman. “But then she argued flatly — she believes the only person responsible for the conduct that she described is her, the woman who committed the alleged assault, John.”

Inabinett will go to trial in March in Maryland. Her attorney disputed Conway’s allegations and told CNN in a statement that Inabinett “saw Kellyanne Conway, a public figure in a public place, [and] exercised her First Amendment right to express her personal opinions.”

“She did not assault Ms. Conway. The facts at trial will show this to be true and show Ms. Conway’s account to be false,” the attorney said, noting that Inabinett will plead not guilty.

This is not the first time [2] Trump administration officials have been confronted at restaurants and other public places.

White House press secretary Sarah Sanders temporarily was given Secret Service protection after the owner of The Red Hen restaurant in Lexington, Virginia, asked her and her family to leave the establishment last summer because she works for Trump.

Conway said Trump asked her, ‘Are you OK? Was your daughter OK? Were the other girls OK?'”

Department of Homeland Security Secretary Kirstjen Nielsen was also confronted at a restaurant.

Vehemently anti-Trump Rep. Maxine Waters (D-Calif.) fielded bipartisan backlash after she urged Americans during a rally last June to protest against Trump administration policies by initiating public confrontations with officials simply because of their association with the president.

“If you think we’re rallying now, you ain’t seen nothing yet,” Waters told attendees at a rally in Los Angeles. “If you see anybody from that [Trump] Cabinet in a restaurant, in a department store, at a gasoline station, you get out and you create a crowd and you push back on them, and you tell them they’re not welcome anymore, anywhere.”