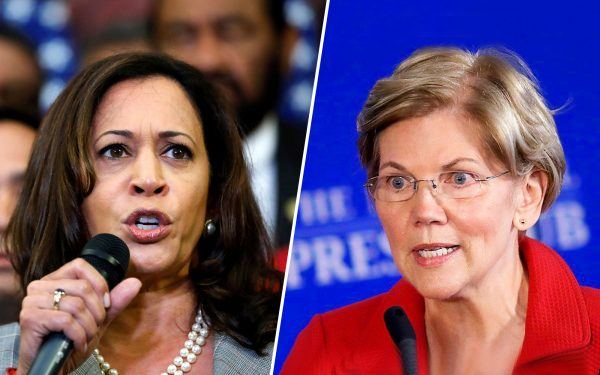 It is “shameful” and “self-defeating” that 2020 Democratic presidential hopefuls are now calling for some form of reparations for the descendants of slaves, conservative author and columnist Shelby Steele said Tuesday night on Fox News’ “The Ingraham Angle.”

Sen. Kamala Harris (D-Calif.) told “The Breakfast Club” in a recent interview that government reparations for the descendants of African-American slaves [1] would be a key component of addressing racial discrimination.

Harris (pictured above left) also told The New York Times, “We have to be honest that people in this country do not start from the same place or have access to the same opportunities.”

The California senator added, “I’m serious about taking an approach that would change policies and structures and make real investments in black communities.”

Sen. Elizabeth Warren (D-Mass.) also supports reparations for African-Americans whose ancestors were slaves. Warren (above right) even broadened the reparations scope to include the descendants of Native-Americans whom European settlers displaced [2].

Former Housing and Urban Development Secretary Julián Castro (D), another presidential hopeful, recently told The Root that the country “would be better off” if the government made reparations to African-Americans.

Fox News host Laura Ingraham noted, “There’s an interesting phenomenon among Democrats ahead of the 2020 election,” in which “one of their fringe members proposes something really radical and then they all rush in to support it.”

Steele said it is “unimaginable” that anyone “would have the hubris to think you could resolve slavery” by making reparations.

Advocating for reparations means “holding onto an idea of justice that’s absolutely impossible,” he warned.

“Not only is it impossible, but it’s self-defeating because you have to continue to see yourself as a victim waiting around in life to be resurrected by the beneficence of the larger society, by white guilt,” Steele argued.

“And once again, you put your fate in the hands of other people rather than yourself.”

Related: The ‘Politics of Me’ Is Arrogant and Divisive, as Spike Lee, Ocasio-Cortez and Others Demonstrate [3]

Steele, who is African-American, said, “I would like very much to think that I have … the dignity to reject even the most lavish reparations.”

“I have too much racial pride to consider such a thing. Keep your reparations,” Steele said. “I will fight like every other man in the world, every other person in the world, to get ahead, to make progress. But to cling to this idea is shameful.”

“We’re calling back this old problem of racism to hide from our new problem of freedom.”

Those offering to make reparations to African-Americans and other minorities “steal the thunder of the people you’re trying to help” by “facilitating weakness in the very people we’re trying to help.”

“The problem is that we have, as a people who were oppressed for three-and-a-half centuries — we don’t yet know how to deal with freedom. Freedom is far more of a problem in minority communities today than racism,” Steele argued. “We’re calling back this old problem of racism to hide from our new problem of freedom.”