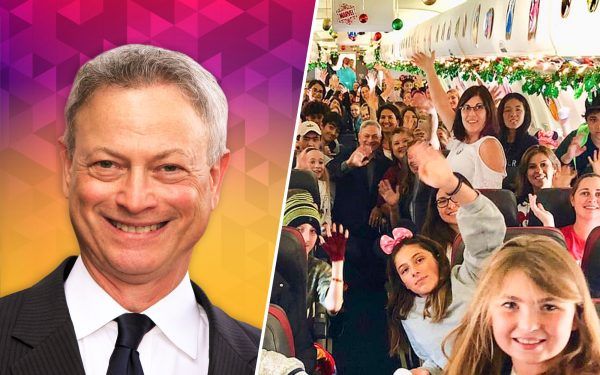 Actor Gary Sinise is known not only for his memorable role as Lt. Dan Taylor in the 1994 Oscar-winning film “Forrest Gump” — a perennial fan favorite — but also for his real-life service to the U.S. military.

Sinise, author of the just-published book “Grateful American: A Journey from Self to Service,” [1] has done an extraordinary amount to show his respect for veterans, their families, and active duty members of the American military.

Just last December, the Emmy Award-winning actor sent 1,750 children of Gold Star families [2] and their relatives to Disney World; he did it via the Snowball Express program with his charity, The Gary Sinise Foundation.

The foundation has also served more than 160,000 meals to veterans in the country and developed some 70 smart homes [3] for wounded veterans, allowing them to live as independently as possible.

Sinise and his Lt. Dan Band perform for the troops [5] across the country frequently. They also participated in the USO Holiday Tour, going to Iraq and Afghanistan to perform for service members around Christmastime.

Sinise also serves as spokesman for the American Veterans Disabled for Life Memorial — and in a segment that aired on Fox News’ “The Ingraham Angle” on Friday night, he talked about his longtime commitment to the military to host Laura Ingraham and Fox News contributor Raymond Arroyo.

He had family members in the service, as did his wife, he said. In the 1980s, he started working with Vietnam veterans and later with wounded veterans because of his role in “Forrest Gump.”

But it was 9/11 and the War on Terror that put him squarely where he is today, he said.

“I was hit with that. My heart was broken. I saw us getting deployed to Iraq and Afghanistan and our guys getting hurt and getting killed, and the families and everything struggling. I just wanted to help my country and those who are defending our country,” he said. “It’s just snowballed into a huge mission.”

Sinise agreed — and he and his Lt. Dan Band played a concert in Staten Island for that purpose.

“We still have people getting hurt and we still lose them. We still have Gold Star families each year that we have to take care of. We have a lot of wounded still.”

“We have a lot of very wounded service members and they have needs,” he said. “We provide these smart technology houses for them, offer[ing] them a chance to be more independent in their home. By doing that, it gives their families independence because they don’t need to help them as much.”

Even with all he has done already, the 63-year-old said he is not giving up on his mission any time soon.

“There are still people in need,” he said. “We’re still at war. We still have people getting hurt and we still lose them. We still have Gold Star families each year that we have to take care of. We have a lot of wounded still.”

“I’ve seen a lot of need out there,” Sinise added. “I’ve also seen the joy [from] just showing up and what that can bring — so I just show up and point people in the right direction to help these folks.”