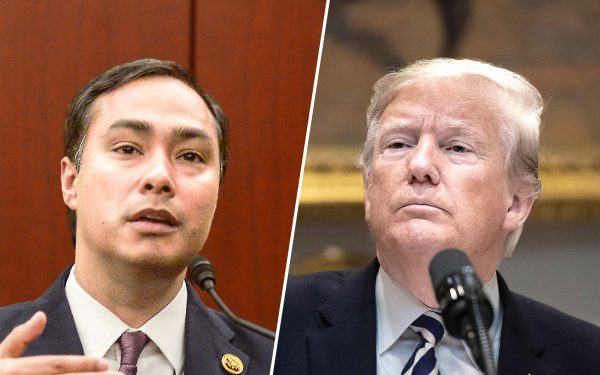 House Democrats introduced a resolution on Friday amid a contentious fight on border security to block an emergency declaration to get more funding for the wall.

President Donald Trump declared a national emergency to get funding for a border wall between the U.S. and Mexico.

The move came as legislative talks failed to come close to his demands.

Rep. Joaquin Castro (D-Texas) introduced the resolution with the aim of ending the emergency declaration.

Speaker of the House Nancy Pelosi (D-Calif.) has helped to garner support for [1] the resolution over the past week. She sent a letter to lawmakers late Wednesday encouraging them to support plan and has said they will move quickly to pass it.

The proposal was boasting 222 co-sponsors just a day before [2] it was officially introduced.

The border security fight leading up to the resolution was so bad it led to a record-long partial government shutdown — that finally ended on January 25.

But the issue also threatened another shutdown since the first one ended after a short-term spending bill was signed. Congressional negotiators only had three weeks to find a compromise.

Trump did end up signing the proposal with pressure from both parties to stop the incoming shutdown. But he also declared the national emergency because the deal fell far short of the $5.7 billion he requested for the border wall. He could possibly free up billions [3] in emergency funds for his wall from various federal reserves through the National Emergencies Act (NEA).

The budget compromise includes $22.54 billion in total border security funding, with $1.375 billion of that going to 55 miles of physical barriers along the southwest border.

The proposal also funds the remaining parts of the federal government through the fiscal year to September 30.

Trump is also facing lawsuits for his emergency declaration. California Attorney General Xavier Becerra is leading 16 other states who have sued [4] the administration. The American Civil Liberties Union (ACLU) was in court to make arguments for the first time in its own lawsuit late Thursday. The ACLU has also mobilized protests [5] against the decision as well.

House Democrats have a majority — which means the resolution is likely to pass along with its many co-sponsors. They were able to win back a majority during the midterm elections last year. But the plan is unlikely to get much further after that, since Republicans have control of the Senate.

Trump had been considering declaring a state of emergency since the latter part of the government shutdown. He has argued numerous times the situation at the border constitutes a crisis and that a wall is critical to deterring [7] illegal drugs and criminal gangs from coming into this country.