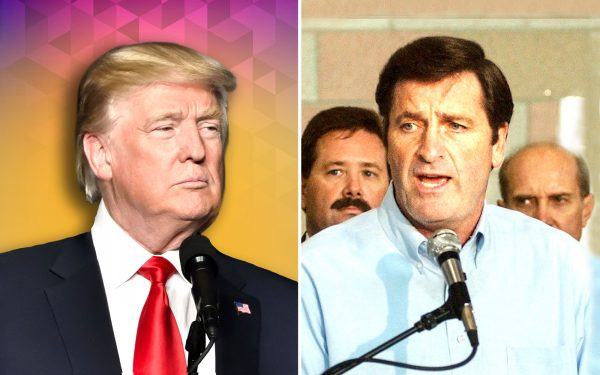 If President Donald Trump were to fund the border security wall without going through Congress, Rep. John Garamendi (D-Calif.) threatened on Wednesday to make him “pay a heavy price.”

The government partially shut down in late December after Democrats refused to give Trump the necessary $5.7 billion in border wall security funding to protect the country. But Congress and Trump agreed in late January to adopt a short-term budget bill that would fund the government until Friday.

Republicans and Democrats announced this past Monday they’d reached a deal.

Although it’s not yet officially released, reports indicate the deal allocates just $1.375 billion for border barriers. [1]

White House press secretary Sarah Sanders told Fox News on Wednesday the president is waiting to “see what the final package looks like.”

Although Trump isn’t “happy about it,” he is “OK because he’s going to get the job done no matter what,” Sanders declared.

Yet Garamendi (pictured above right) introduced legislation on Tuesday to prevent Trump from going around Congress by “diverting disaster-recovery funds from Army Corps civil works projects to build his border wall.”

“Taking recovery funds from disaster victims as ransom for a border wall would be a new low, even for this president,” Garamendi said in a statement. “No president has ever raided disaster-recovery funds, and we should not allow President Trump to be the first.”

Garamendi doubled down on Wednesday in an interview with CNN’s Kate Bolduan on “At This Hour” — and then threatened the president.

“Come to the Congress. Go through the appropriation process. Make a determination whether it’s appropriate and whether it’s useful to spend money on that” wall, Garamendi said — warning that there is “$37 billion that the president could conceivably take out of communities around the nation” to fund the wall.

“We don’t want him to do that, and I know for a fact that states and local communities are gearing up to file a lawsuit that the president is using a sham emergency to override the constitutional authority of Congress to appropriate money,” Garamendi continued.

CNN’s Bolduan noted it is highly unlikely that both chambers of Congress would pass the lawmaker’s bill and that Trump would sign it.

Garamendi fired back, “However, there’s this thing called ‘we don’t vacate the field.'”

“If the president goes over and overrides the appropriation process, overrides the authority of Congress by moving significant amounts of money from one program to another, there is a thing called, ‘We’ll see you tomorrow, Mr. President. You’re going to have to come back here for all of your programs for everything,'” Garamendi added.

“And so the president needs to be careful about that,” Garamendi continued.

“Now could the president take that money? He could. But I’ll guarantee you there would be tomorrow. And when tomorrow comes, the president would pay a heavy price in other things that he might think are important.”

Bolduan appeared taken aback, saying, “That sounds like quite a threat coming from you.”

“Well, take it for what it is. I don’t say things idly,” Garamendi insisted. “Absolutely he’ll pay a price.”