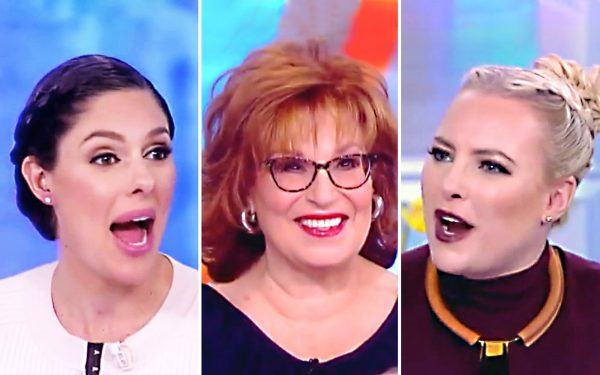 ABC News’ “The View” co-host Abby Huntsman (shown above left) caused an uproar Monday when she suggested that former Ohio Gov. John Kasich (R) might run for president again in the 2020 GOP primary in a doomed quest to bump President Donald Trump from the Republican ticket.

Kasich served as Ohio’s governor until January 14; he ran an ill-fated presidential campaign in 2016 against Trump.

“And I was very surprised at that because, one, there hasn’t been a primary, and so I felt that it was discouraging challengers on the Right,” co-host Sunny Hostin said. “And I thought, wow, after this shutdown I thought that I would see more of a breakaway from President Trump, but instead I thought that I saw Republicans sort of coming together,” Hostin added.

The partial government shutdown ended last Friday after Trump agreed to a three-week funding bill without money for the border wall, with one caveat: “If we don’t get a fair deal from Congress, the government will either shut down on February 15 again, or I will use the powers afforded to me under the laws and the Constitution of the United States to address this emergency.” Those were Trumps’ words during a speech in the Rose Garden at the White House.

Huntsman said it’s “not totally uncommon for an incumbent” to receive the party’s backing prior to the primaries.

“The question I would ask to both of you is where do Republicans that are frustrated — whether you’re moderate or whether you are an Ann Coulter — where do you go?” Huntsman wondered.

That’s when co-host Meghan McCain (above right) expounded upon the issue, noting she herself made news over the weekend during an interview on CNN’s “The Van Jones Show.”

McCain insisted on CNN that she prefers to identify herself as a conservative, rather than as a Republican, because she took issue with the party being “so tied up” with Trump.

“Then I also said I’m still in the party and I vote Republican on the ticket and I do go in for it, but Trump gets nothing from me,” McCain said on “The View.” “And that has somehow been interpreted that I have led this mass exodus out of the Republican Party. It’s not true at all.”

“I am still a Republican. But not voting for Trump doesn’t necessarily mean you’re no longer a conservative,” McCain said before blasting RNC Chairwoman Ronna McDaniel as someone who “100 percent took the Trump train all the way along.”

Related: John McCain’s Daughter: ‘I Hate This Country Without Him in It’ [1]

“That being said, anyone who’s trying to primary Trump — it’s a pipe dream and it’s never going to happen,” McCain emphasized.

But chaos entered the picture on “The View” when Huntsman suggested, “I think John Kasich could run as either an independent or a moderate.”

“I love you, but that’s crazy,” McCain said.

The co-hosts began laughing and shouting over each other before Hostin drew attention to grinning liberal co-host Joy Behar (above center), who sat at the table’s center with Huntsman on one side and McCain further over on her other side.

“Look at Joy! Look at Joy!” Hostin yelled, saying they were all witnessing “Republican-on-Republican crime.”

Huntsman fought back against McCain, demanding, “Did John Kasich not sit right here and said he was considering running again?”

Kasich has angered Republicans with moves like vetoing Ohio’s so-called “Heartbeat Bill,” which banned abortion after the detection of a baby’s heartbeat.

At that point, an audience member shouted, “Yes!”

McCain fired back at that person, shouting, “Ma’am, are you a Democrat? Because this is a Democrat pipe dream.”

Check out more of the wild segment below: