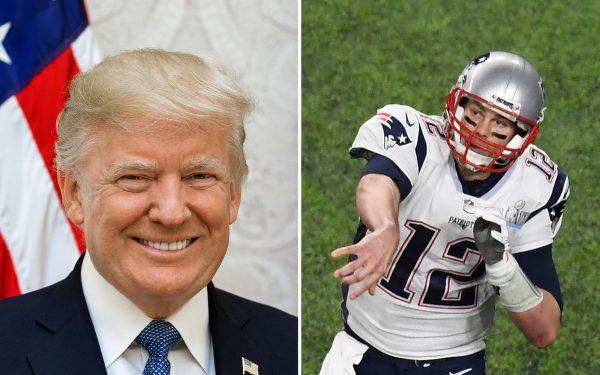 President Donald Trump is scheduled to make an appearance during the pre-game coverage on CBS on Super Bowl LIII on Sunday this year, as Fox News [1] and other outlets reported.

The commander-in-chief is going to pre-tape an interview that will air on “Face the Nation” with anchor Margaret Brennan, CBS News [2] said.

The pre-Super Bowl Presidential Interview has become an American tradition, as Deadline [3] and others noted.

(Shown above is quarterback Tom Brady of the New England Patriots; the Patriots face the Los Angeles Rams on Sunday evening.)

Former President Barack Obama did live interviews each year throughout his presidency.

Trump’s pre-game interview will come two days before he is expected to deliver his State of the Union address.

Speaker of the House Nancy Pelosi (D-Calif.) re-invited him to give the address — which is now scheduled for February 5 — and Trump accepted on Monday evening, the White House reported.

“It is my great honor to accept,” Trump wrote to the speaker. “We have a great story to tell and yet, great goals to achieve!”

As for the Super Bowl appearance, “the taped interview will air Sunday on ‘Face the Nation,’ which will broadcast from Atlanta, Georgia, before CBS’ coverage there [4] of Super Bowl LIII,” as CBS News noted.

“Another part of the interview will air later in the day, at approximately 3:30 p.m. on the CBS Television network.”

Related: Trump Congratulates Tom Brady and the New England Patriots for Making It to the Super Bowl [5]

Last year Trump did not make an appearance at the Super Bowl, apparently because terms could not be worked out with NBC, according to reports.

For more on this year’s Super Bowl, check out the video below: