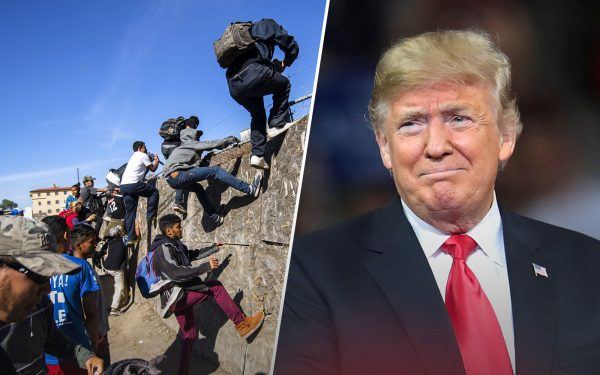 President Donald Trump walked out of a Wednesday meeting with Democratic leaders to resolve the government shutdown after seeing it as a “waste of time.”

Trump and congressional leaders have met numerous times throughout the partial government shutdown to resolve it with little success.

Senate Minority Leader Chuck Schumer (D-N.Y.) and Speaker of the House Nancy Pelosi (D-Calif.) have opposed his border wall plan. Trump walked out of the latest meeting with them with still no solution in sight.

“Just left a meeting with Chuck and Nancy, a total waste of time,” Trump tweeted.

“I asked what is going to happen in 30 days if I quickly open things up, are you going to [1] approve border security which includes a wall or steel barrier? Nancy said, NO. I said bye-bye, nothing else works.”

Trump has long promised to build a security wall along the southern border and is fighting to get $5.6 billion to do just that.

He has even threatened to veto spending bills until he gets it. Democratic leaders have been equally opposed to providing any funding.

The impasse led both sides to the government shutdown on December 22.

Just left a meeting with Chuck and Nancy, a total waste of time. I asked what is going to happen in 30 days if I quickly open things up, are you going to approve Border Security which includes a Wall or Steel Barrier? Nancy said, NO. I said bye-bye, nothing else works!

Trump said during a press conference a few hours prior [2] that he may end up declaring a state of emergency to address the border crisis.

The move could possibly allow the president to free up billions [4] in emergency funds for his wall through the National Emergencies Act. But he is also likely to face legal challenges doing so.

“Our meeting did not last long,” Pelosi said after the meeting from outside the White House. “Many federal workers will not be receiving their paychecks, and what that means in their lives is tragic in terms of their credit rating, paying their mortgage, paying their rent, paying their car payments, paying their children’s tuition, and the rest. The president seems to be insensitive to that. He thinks they can, maybe, ask their father for more money.”

Trump also stressed the importance of having a border wall [5] during his first Oval Office address on Tuesday night.

Congress has had nearly continuous news conferences and internal discussions in the day since that address. Lawmakers from both parties have also held press conferences throughout the day on the issue as well.

Related: Trump from the Oval Office About the Border: ‘Dems Have Refused to Acknowledge the Crisis’ [5]

Schumer and Pelosi stood alongside a dozen federal workers [7] hurt by the shutdown while blaming it on the president.

Sen. John Thune (R-S.D.) accused them of refusing [8] to negotiate early as well as the same day as well.

House Democrats have made a few attempts of their own to end the shutdown. They passed two bills intended to fund most [9] of the government while leaving room to debate border security. They later announced a plan to pass [10] four separate appropriations bills.

But without border wall funding, they are unlikely to get far unless the president relents.

Trump is also planning on traveling to the [11] southern border to see it firsthand on Thursday.