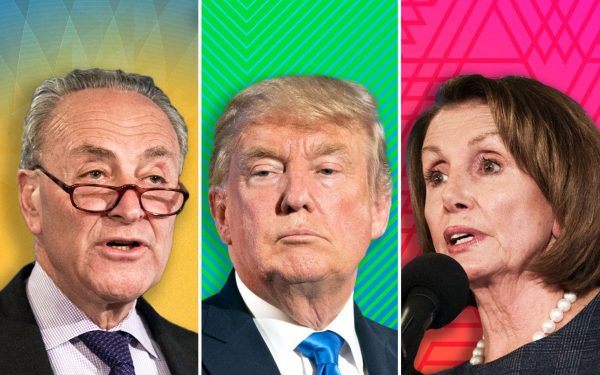 President Donald Trump delivered a “sober” and “extremely serious” Oval Office address advocating for his immigration enforcement agenda and the dire need for a border wall — while Democratic leaders in their rebuttals did not “give a damn about securing the border” at all, Fox News host Laura Ingraham said Tuesday night on “The Ingraham Angle.”

Trump delivered his first Oval Office address Tuesday evening carried by the major TV networks during prime time. The address occurred in the midst of a partial government shutdown, which resulted from Democrats’ refusal to give Trump the $5 billion in border wall funding he demanded.

The president called for ending the “humanitarian crisis” at the border and urged Democrats to provide wall funding and reopen the government; Speaker of the House Nancy Pelosi (D-Calif.) and Senate Minority Leader Chuck Schumer (D-N.Y.) then offered their perspective.

“Democrats in Congress have refused to acknowledge the crisis. And they have refused to provide our brave border agents will the tools they desperately need to protect our families and our nation,” Trump said.

“The federal government remains shut down for one reason, and one reason only,” Trump continued. “Because Democrats will not fund border security.”

He urged members of the other party to “rise above partisan politics in order to support national security.” But Pelosi and Schumer refused to back down in their joint prime-time rebuttals.

“Much of what we have heard from President Trump throughout this senseless shutdown has been full of misinformation and even malice,” Pelosi claimed. “The president has chosen fear.”

Schumer said, “The symbol of America should be the Statue of Liberty, not a 30-foot wall,” as he urged Trump to “re-open the government and we can work to resolve our differences over border security.”

Ingraham argued that “the president was really sober in his address. He was extremely serious. And he genuinely believes that a wall is needed as part of a larger border security policy. That’s what he campaigned on. That’s what he won on.”

“Democrats do not give a damn about securing the border. For them, this is all about scoring political points — and of course, about 2020,” Ingraham warned.

The Fox News host also praised Trump for scoring “a major media coup” by getting “all the major networks to carry his address, galvanizing the attention of the entire country.”

“And he accomplished something else. He got two of the least popular politicians in the nation to respond to him on his terms,” Ingraham noted.

Military historian and political columnist Victor Davis Hanson noted that “the problem” is “not that the Democrats are worried the wall doesn’t work. Historically, we know it does.”

Related: Trump from the Oval Office About the Border: ‘Dems Have Refused to Acknowledge the Crisis’ [1]

“But the problem is it works too well. And believe me — if electronic surveillance and drones worked better than a wall, then the Democrats would be saying that they were both technologically cruel or racist or inadequate,” Hanson said. “The problem is the wall works.”

Byron York, the Washington Examiner’s chief political correspondent and a Fox News contributor, said “the big job tonight” was for Trump “to convince the American people that there really is a crisis.”

“The president says there’s a crisis. The Democrats say no, there is not. The reason the administration says it’s a crisis is not because the number of total people coming across the border has risen. It is actually down from what it was a number of years ago,” York noted.

“But they say the type of people coming across [the border] has changed. The flow has changed. In the past, you were talking about individual adults — mostly men — who could be caught and quickly returned to Mexico,” York added. “Now they say two-thirds of the flow is families and unaccompanied children. They cannot be returned. They come into the United States and the law makes it impossible to return them.”

But Chris Hahn, a former aide to Schumer, claimed Trump’s “speech tonight indicates to me that the president knows he’s losing and that the Senate Republicans said, ‘You’d better get out there and try to rally the troops.'”

Check out more on this story in the video below: