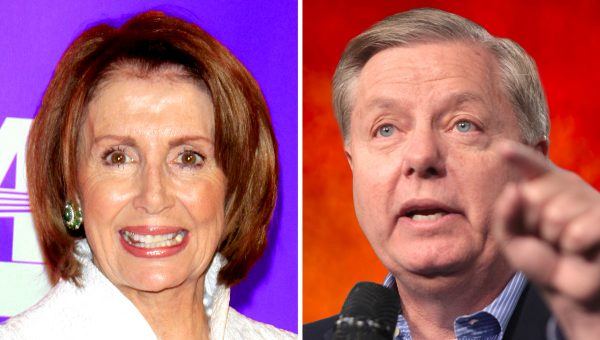 Republican Sen. Lindsey Graham of South Carolina condemned House Speaker Nancy Pelosi’s decision not to invite Trump to deliver the State of the Union address in the House chamber next week, calling it a “new low for American politics.”

Other leaders, also critical, slammed what they described as a “petty tactic.”

Graham issued a statement Tuesday, shortly after Pelosi sent a letter to the president saying she would not introduce a concurrent resolution, which is needed to allow the use of the chamber for the State of the Union, as long as the government’s partial shutdown continues [1].

“The president — regardless of party — should have the opportunity to address the American people in the State of the Union address from the traditional venue of the U.S. House of Representatives,” the senator from South Carolina said in a statement.

The judgment of history “will not be kind.”

The House GOP also fired back at Pelosi’s letter, dismissing it as a “politically motivated stunt.”

“This is a sad day and an embarrassing showing of how Speaker Pelosi and House Democrats are blinded by political gamesmanship above all else,” said a joint statement from House Minority Leader Kevin McCarthy (R–Calif.), Republican Whip Steve Scalise (R-La.), and Conference Chairwoman Liz Cheney (R–Wy.).

“There is no good reason for her to obstruct this speech, apart from the fact that she wants to prevent him from using it to point out that House Democrats still refuse to hold reasonable negotiations on securing our border and opening up government.”

Pelosi’s decision not to invite Trump comes as the nation reached the 33rd day of its partial government shutdown over an impasse on the funding of Trump’s proposed border wall.

The chairman of the House Democratic Caucus Rep Hakeem Jeffries (D–N.Y.) doubled down on Pelosi’s call to end the shutdown, saying to the president that until that happens, “GET LOST.”

Sen. Mark Warner (D-Va)., when ask by Fox News’ Neil Cavuto on Wednesday about Pelosi’s letter, responded, “I’m going to leave that to those folks on that tit for tat.”

Though he acknowledged a need to bolster border security, he said the shutdown needs to end first.

Paulina Dedaj is a writer/ reporter for Fox News. Fox News’ Chad Pergram contributed to this Fox News report [3], which is used by permission.