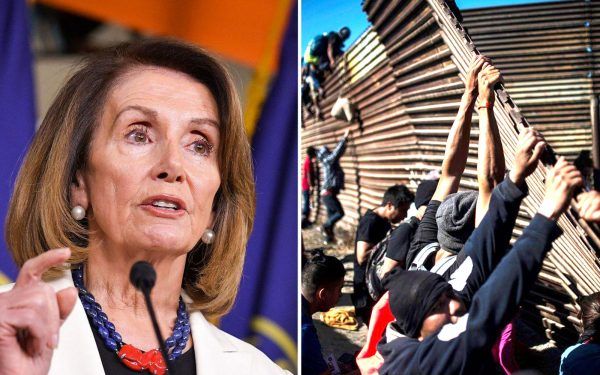 Speaker of the House Nancy Pelosi (D-Calif.) disinvited President Donald Trump from delivering his State of the Union address on Wednesday amid the ongoing government shutdown because she “doesn’t want the American people to hear the president’s message,” House Minority Whip Steve Scalise (R-La.) said Wednesday night on Fox News’ “The Ingraham Angle.”

Pelosi asked Trump in a letter last week to postpone his State of the Union address, scheduled for January 29, until after the government reopened — citing “security concerns” as the official reason. But Department of Homeland Security (DHS) Secretary Kirstjen Nielsen said last week that DHS and the U.S. Secret Service “are fully prepared to support and secure the State of the Union.”

Trump retaliated by canceling her planned foreign trip via military aircraft. After the president sent a letter to her declaring his intention to still deliver his State of the Union address in front of the House of Representatives — Pelosi officially disinvited him on Wednesday.

“I am writing to inform you that the House of Representatives will not consider a concurrent resolution authorizing the president’s State of the Union address in the House Chamber until government has opened,” Pelosi wrote. “Again, I look forward to welcoming you to the House on a mutually agreeable date for this address when government has been opened.”

Scalise told Fox News host Laura Ingraham that Trump is “still going to give a State of the Union address” — but in a different location.

“We’ve talked about a number of locations. But ultimately it’s the message that’s so important,” Scalise said. “This is about securing the border of our country. Clearly Nancy Pelosi doesn’t want the American people to hear the president’s message.”

“The American people want to hear the president’s message. Nancy Pelosi can’t stop this. It just shows how petty she is and how disgraceful this action is,” Scalise continued. “She’s now going to have this stain on her record.”

The government shut down just before Christmas after Democratic lawmakers refused to give Trump the $5 billion he said was needed for a wall to secure the border and address the humanitarian crisis that illegal immigration posed at the border.

Rep. Andy Biggs (R-Ariz.) told Ingraham he invited the president to give his State of the Union address in Arizona instead.

Related: Pelosi’s Disinvite to Trump for SOTU Is a ‘New Low for American Politics,’ Says Graham [1]

“It’s a border state. It’s a great backdrop. He’s loved in Arizona. I don’t want it to be a rally. I want it to be his true State of the Union,” Biggs said. “But let’s do it — why not do it in a friendly environment? Bring the Democrats in. Maybe they’ll go down to the border and see what’s really going on and understand the crisis as well.”

Scalise said the American people “are for securing the border” and said that Trump “is gaining momentum because people are seeing what this is all about.”

“Frankly, these kinds of actions by Nancy Pelosi only heighten the awareness of what’s going on. And the more she does this, she’s got more of her own Democrats in her party that are moving away from her,” Scalise said, pointing to the growing number of Democrats that are publicly expressing their willingness to offer money toward border barriers in some places.

But Pelosi and other Democrats are “taking a dangerous position by opposing border security. They’re on the wrong side of this issue,” Scalise warned.

“We need to reopen government and we need to secure the border. We can do both,” Scalise said. “And now [Pelosi] thinks by holding the State of the Union hostage she’s going to be able to win this. The people of this country want to see the border secure. She’s on the wrong side.”

Late in the evening on Wednesday, just after 11 p.m., Trump tweeted out these thoughts about his State of the Union this year:

As the Shutdown was going on, Nancy Pelosi asked me to give the State of the Union Address. I agreed. She then changed her mind because of the Shutdown, suggesting a later date. This is her prerogative – I will do the Address when the Shutdown is over. I am not looking for an….

….alternative venue for the SOTU Address because there is no venue that can compete with the history, tradition and importance of the House Chamber. I look forward to giving a “great” State of the Union Address in the near future!