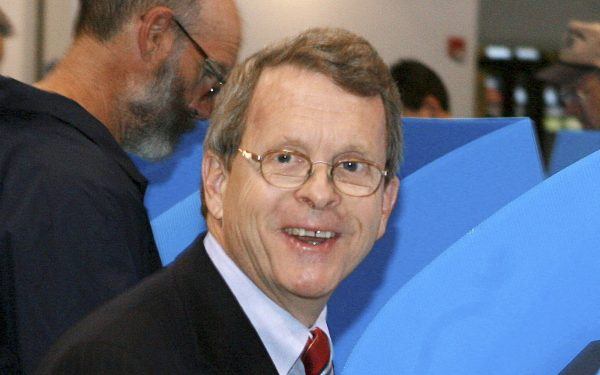 It’s not unusual for lawmakers to use books of faith or family heirlooms during swearing-in ceremonies.

But when new Ohio Gov. Mike DeWine (R) was sworn in earlier this week, he chose not one Bible but nine.

DeWine, the 72-year-old Republican who replaced Gov. John Kasich, took his oath at midnight Monday at his home, the Cincinnati Enquirer reported.

The ceremony was a family affair.

While his wife held the nine, rather thick Bibles, his son, Ohio Supreme Court Justice Pat DeWine, gave the oath, DeWine said in a tweet.

According to WOIO-TV, the nine Bibles were chosen because of their importance to his family. They included:

The Bibles were supposed to represent each of the couple’s eight children, a spokesman told the Cincinnati Enquirer.

The theme of DeWine’s inauguration was “Faith, Family and Friends.”

He’s a Catholic family man who lives on a historic farm in rural Cedarville.

He is Ohio’s oldest governor.

New Ohio Gov. Mike DeWine is being sworn in at the Statehouse https://t.co/KwP6kauJSv [1] pic.twitter.com/oiuTWraxgP [2]

His governorship will cap a political career that began as an assistant prosecutor in rural Ohio in the 1970s and saw election to seats in the Ohio House, U.S. House, the state lieutenant governor’s office and U.S. Senate.

His style is expected to be different from Kasich’s, as he’s expressed a willingness to embrace more conservative policies.

That includes moving in his final days as attorney general to dismiss a lawsuit challenging Ohio’s congressional districts and saying he’s willing to sign a heartbeat abortion ban that would be one of the most stringent restrictions on the procedure in the country.

Kaitlyn Schallhorn is a reporter for Fox News. The Associated Press contributed to this Fox News [10] report, which is used by permission.