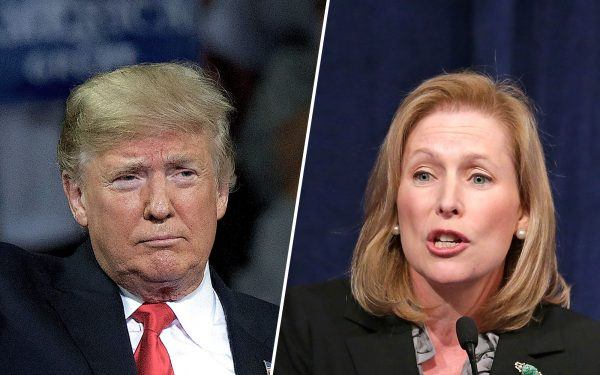 “I don’t take him on his word on anything,” she told Margaret Brennan on CBS News’ “Face the Nation.”

Trump, in his tweet, floated the idea of amnesty as a negotiating point for a broader future deal.

“If he really cares about this, he would open up the government,” insisted Gillibrand, referencing the 800,000 government workers affected by the partial government shutdown. “It just shows a callousness that is unacceptable.” She called the offer “cynical.”

DACA stands for Deferred Action for Childhood Arrivals. It is an Obama-era program that allowed qualified recipients a temporary reprieve from deportation. DACA expired last spring; the recipients are a subset of dreamers, which stands for the Development, Relief, and Education for Alien Minors (DREAM) Act. The illegal immigrants known as dreamers were brought to the country as children.

Gillibrand’s version of compromise involves the president’s acquiescing to Democratic demands while receiving nothing in return on border wall funding.

“And so open the government,” she said Sunday. “Pay the people. Pay our public servants. Then get to the business of talking about a comprehensive immigration reform.”

Speaker of the House Nancy Pelosi (D-Calif.) has already said she will not support wall funding.

Vice President Mike Pence, who described the offer Trump articulated on Saturday as a “good faith, common sense compromise,” [1] appeared earlier in the hour on “Face the Nation.” During “that meeting in the Situation Room, a week ago Wednesday, the president looked at Speaker Pelosi and said, ‘OK, if I gave you everything you wanted, if I signed legislation funding most of the government, and had a 30-day extension on Homeland Security … would you give me funding to secure the border and a wall?’ And she said ‘no.'”

Gillibrand continued ripping into Trump on both CNN’s “State of the Union” and ABC’s “This Week” on Sunday.

“He has no compassion. He has no empathy for the people … suffering because of his decisions,” she told CNN host Jake Tapper, adding that Trump stoked “fear and division and a darkness across this country.

Gillibrand said her own counteroffer last year involved permanent protection and a “pathway to citizenship for all dreamers.” Trump’s offer includes three years of protection — which puts it into the next administration — to DACA recipients.

She also said a wall is a “waste of money and will not actually help us create safety.”

Challenged by Tapper on her 2008 position that opposed amnesty and supported expedited deportation of illegal aliens, Gillibrand said her previous positions “certainly weren’t empathetic and they were not kind, and I did not think about suffering in other people’s lives … What he [Trump] has done is so horrible and so mean-spirited that I am nothing like him.” Gillibrand did not, however, characterize the positions she once held as “racist,” though she’s ascribed that term to Trump for holding analogous positions.

Trump ordered the end of DACA and TPS. Then he shut down the government. Now he’s holding federal workers hostage, saying he'll temporarily give back what he took away—only if we give him a pointless, ineffective wall he falsely promised Mexico would pay for. This is a bad deal.

“He’s just playing politics,” she said, saying it was Trump who was holding 800,000 government workers’ livelihoods hostage. “If he really wants to work on comprehensive immigration reform, open the government, and then sit down with Democratic leaders to actually work on the stuff that needs to get done. People need a pathway to citizenship.”

The DACA program has always been temporary; it expires every two years unless the recipient is accepted on application for renewal.

Though she said last October she intended to serve out her six-year senatorial term, Gillibrand announced last week she was forming an exploratory committee to run in the 2020 election [3]. On Sunday she repeated what appears to be a go-to line for her campaign — that she plans to fight as hard for every American’s children as she would fight for her own.

Check out this video — then see the tweets below:

What an airhead. Didn't notice anyone interrupting her every 5 seconds with questions about her hair-brained bill. All smiles! Watching for entertainment value only to see just how far left CBS is. Not disappointed. Back to @FoxNews [4] #MAGA [5]

What happened to her pledge to complete her term as a Senator if she was elected this year? Truth or not?