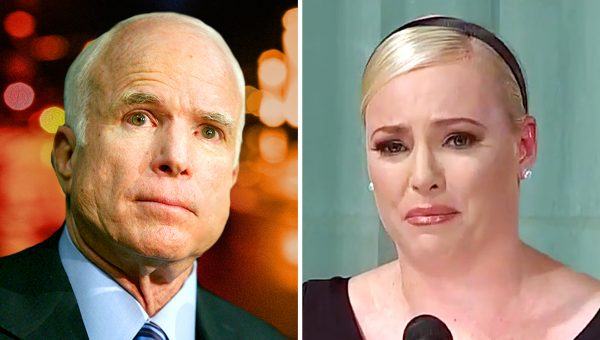 Meghan McCain, daughter of the late Arizona Sen. John McCain and a co-host of ABC’s “The View,” declared over the weekend that she no longer calls herself a Republican.

She said that is because the party is “so tied up with being for” President Donald Trump — and that she’s trying “to navigate” this.

McCain, 34, made the remarks during an appearance on CNN’s “The Van Jones Show.”

Related: 10 Conservatives Respond to Meghan McCain’s Attack on Trump at Her Father’s Funeral [1]

But she said President Trump appears to have a stranglehold on Republicans — and she has a big problem with this.

“I think over 80-something percent of Republicans support President Trump and maybe they are doing it because they don’t have another option, but I think the populous Trump brand really has taken over,” McCain said to Van Jones [2].

“Which is why there’s this sort of no-mans-land that I’m in.”

She said she’s “trying to survive in a lot of ways” right now.

Meghan McCain then evoked the memory of her late father — who was an ardent critic of Trump.

She said, “As an American, I hate this country without him in it. I know that sounds awful. I don’t hate America, but I just hate it without his leadership. I’m very — I’m sad all the time. And I’m struggling with that sadness, and I miss him in ways that I never even could have fathomed.”

It was hardly a secret that there was no love lost between McCain and Trump over the years.

During the eulogy she delivered for her father in Washington, D.C., at the National Cathedral last fall, Meghan McCain included some serious digs at Trump in her remarks.

“John Sidney McCain III was many things. He was a sailor, he was an aviator, he was a husband, he was a warrior, he was a prisoner, he was a hero, he was a congressman, he was a senator, he was nominee for president of the United States,” said Meghan McCain. “These are all of the titles and roles of a life that’s been well-lived. They’re not the greatest of his titles nor the most important of his roles.”

She continued with these comments, and note the swipe within, though no names were mentioned: “He was a great man. We gather to mourn the passing of American greatness, the real thing, not cheap rhetoric from men who will never come near the sacrifice, those that live lives of comfort and privilege while he suffered and served.”

“The America of John McCain is generous and welcoming and bold,” she also said. “She’s resourceful, confident, secure. She meets her responsibilities. She speaks quietly because she’s strong. America does not boast because she has no need to. The America of John McCain has no need to be made great again because America was always great. That fervent faith, that proven devotion, that abiding love — that is what drove my father from the fiery skies above the Red River delta to the brink of the presidency itself.”

After that eulogy, Meghan McCain received pushback from many corners [1], including social media users — one of whom said, “Obviously the eulogy she delivered was her choice, but no parting shots were needed. A disguised putdown of the president was not necessary. The service should have celebrated her father’s life, not taken shots at the president.”

During his time on the presidential campaign trail, Trump infamously mocked McCain’s war service during an appearance when he said, “I like people who weren’t captured” — a reference to the Arizona senator’s time as a prisoner of war in Vietnam.

McCain’s dying wish was that Trump did not attend his funeral service, according to The New York Times and as Fox News [3] noted.

Meghan McCain also said to Van Jones, “Conservatism and character … my father was really, really militant, I would say, about character. And now it seems, like now, ‘Why? It’s a little nebulous.’ I don’t think those are American characteristics. And it scares me — a lot.”