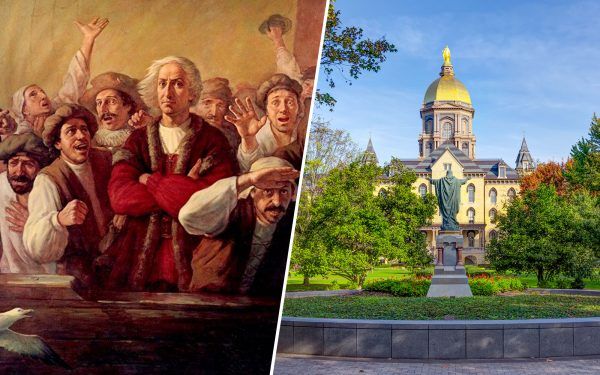 The University of Notre Dame’s president, Rev. John I. Jenkins, announced Sunday he has decided to obscure murals depicting the life and work of Christopher Columbus that have adorned the plaster walls of the school’s Main Building ever since Luigi Gregori painted them in the late 1880s.

“For the native peoples of this ‘new’ land, however, Columbus’s arrival was nothing short of a catastrophe,” Jenkins said in a letter [1] addressed to the members of the Notre Dame community.

“Whatever else Columbus’s arrival brought, for these peoples it led to exploitation, expropriation of land, repression of vibrant cultures, enslavement, and new diseases causing epidemics that killed millions.”

“The murals’ depiction of Columbus as beneficent explorer and friend of the native peoples hides from view the darker side of this story, a side we must acknowledge,” the letter continued.

The dozen original paintings now will be covered by “woven material consistent with the décor of the space.”

Photographic depictions of them will appear at a location on campus yet to be decided, the letter added.

At the time the murals were created, Columbus represented “essential contributions of immigrants and of Catholics to U.S. history,” as Alexandra DeSanctis of National Review explained; [2] it was a period of intense anti-Catholic and anti-immigrant sentiment.

But in 2017, a group of Notre Dame students, employees, and alumni called for the murals to be removed in a letter to Jenkins in the campus newspaper, the Observer, the Associated Press [3] noted.

The letter described the paintings as offering a “highly problematic vision of Western triumphalism, Catholic militarism and an overly romantic notion of American expansion.”

Though a pamphlet explaining the paintings is available to visitors — putting their history in proper context — that is insufficient, say those opposed to the supposedly “problematic” message the art communicates.

Related: The ‘Confederacy Happened’ — We ‘Owe it to the Future’ to Remember History [4]

Instead, the school has opted to hide the art — and to hide the uncomfortable history itself from young, inquiring minds.

For some time, a politically correct mob has been bent on erasing the history that offends them, rather than shedding light on it and using it to affect the change they say they desire.

Check out these tweets — then share your thoughts in the comments section below.

Covering up history is not the answer. Education is.

With the possible exception of disease, each of the crimes of which Jenkins accuses Europeans were also committed against native peoples by other native peoples, both before and after Columbus’ arrival. Now what?

Washington, Jefferson, Madison are next.