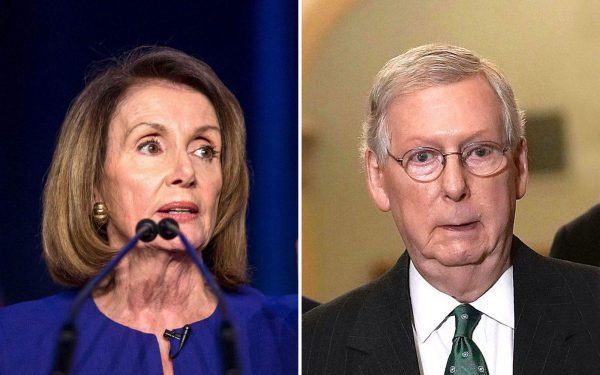 House Democrats were able to pass a package of two bills late Thursday intended to end the partial government shutdown — though this is unlikely to become law.

There is no funding for the border wall in this package.

House Speaker Nancy Pelosi (D-Calif.) brought the package to a vote during the first day [1] of the new session.

The package includes a temporary spending bill to give both sides time to resolve a stalemate on border security.

It would also fully fund the remaining federal departments in order to open the government again.

The Department of Homeland Security is covered by the temporary spending bill through February 8 since it overseas border security.

President Donald Trump has rejected the proposal because it does not include $5 billion to fund his proposed border wall.

Democratic leaders have refused to give him anything for the wall — which led to the stalemate.

“As representatives, funding the federal government is one of our most important duties,” House Appropriations Committee Ranking Member Nita Lowey (D-N.Y.) said from the floor before the vote.

“Our new Democratic majority was elected to end the chaos and govern responsibly. This legislative package to end the Trump shutdown and fully fund the government consists of two parts.”

The House first passed the short-term spending bill 239 to 192 after hours of debate. [2]

Lawmakers then immediately moved to the bill [3] covering the remaining appropriations bills to fully fund the government, which the House passed on a 241 to 190 vote.

The partial government shutdown began when both sides failed to reach an agreement on border wall funding on December 22. Trump and congressional leaders seemed to make [4] little progress after meeting to resolve the shutdown Wednesday.

The president and his supporters have argued the issue is too important to delay it.

“Tonight there will be a smoke and mirrors vote on this House floor,” Rep. Mike Rogers (R-Ala.) said from the floor before the vote. “Democrats want to kick the can down the road and put American security on the back burner while they gear up their obstructionist agenda. It used to be that members of Congress could put partisanship aside at least on national security issues.”

Senate Majority Leader Mitch McConnell (R-Ky.) said he doesn’t plan on bringing any spending bills up for a vote that the president won’t sign.

The White House even released a message hours before [6] the package was approved saying he’ll likely veto it.

“The shutdown is only because of the 2020 presidential election,” Trump tweeted Thursday. “The Democrats know they can’t win based on all of the achievements of ‘Trump,’ so they are going all out on the desperately [7] needed wall and border security — and presidential harassment. For them, strictly politics.”

Senate Minority Leader Chuck Schumer (D-N.Y.) had previously said he was only willing [8] to provide the $1.6 billion for border security. But those funds cannot go to the construction [9] of a border wall.

He later reduced that figure to $1.3 billion during an earlier meeting before the partial shutdown. The highly contentious meeting [10] quickly ended in an argument.

A partial government shutdown occurs when lawmakers don’t pass every appropriations bill or a continuing resolution before the end of the fiscal year. It is essentially when the government runs out of money. Federal agencies must temporarily disband all nonessential employees and functions until new funding legislation is signed into law.

But the government still maintains most of its functions — which is why this is often referred to as a partial shutdown.