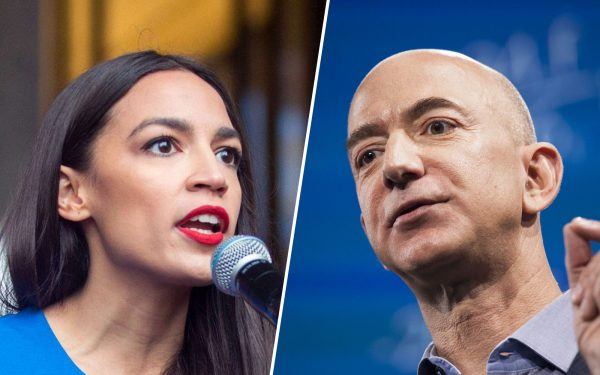 American billionaires like Jeff Bezos (shown above right), Bill Gates, Warren Buffett and Mark Zuckerberg had better watch out: Rep. Alexandria Ocasio-Cortez (D-N.Y.) wants to slap them with a “progressive tax rate system” that could result in a tax as high as 70 percent.

Ocasio-Cortez (above left), the youngest woman ever elected to Congress, was sworn into office on Thursday along with the new Democratic majority.

Although Republicans still control the Senate, House Democrats are eager to enact their progressive agenda and thwart President Donald Trump every step of the way.

The newly minted congresswoman spoke with CNN anchor and CBS correspondent Anderson Cooper for an interview that will air in full on Sunday on CBS News’ “60 Minutes.”

A clip of the interview aired in advance this week.

Ocasio-Cortez is urging her Democratic colleagues to pass the radical Green New Deal, which calls for the U.S. to use 100 percent renewable energy, phase out all fossil fuels within 12 years, and release zero carbon emissions.

A former campaign organizer for Sen. Bernie Sanders (I-Vt.), Ocasio-Cortez is a member of the Democratic Socialists of America and worked as a bartender not too long ago.

After Cooper asked her how she plans to pay for this radical plan and how high she proposes to raise taxes, Ocasio-Cortez replied said that everyone — particularly the nation’s wealthiest — should be ready and willing to pay “their fair share.”

“You know, you look at our tax rates back in the ’60s and when you have a progressive tax rate system, your tax rate, you know, let’s say, from zero to $75,000 may be 10 percent or 15 percent, et cetera,” Ocasio-Cortez replied.

“But once you get to, like, the tippy tops, on your 10 millionth dollar, sometimes you see tax rates as high as 60 or 70 percent,” the congresswoman continued. “That doesn’t mean all $10 million are taxed at an extremely high rate, but it means that as you climb up this ladder you should be contributing more.”

This means that Bezos — Amazon’s CEO and America’s richest individual, with a net worth of $112 billion, according to Forbes — and other liberal-leaning billionaires had better watch out for Ocasio-Cortez and her fellow progressives.

Ocasio-Cortez also embraced the “radical” label, telling Cooper, “It only has ever been radicals that have changed this country.”

And who are these “radicals”?

Oasio-Cortez tweeted out the clip of her interview with Cooper, writing on Friday, “Sometimes we take for granted exactly how radical ideas like Social Security, the VA, and public schooling really are: that we will care for our elders, provide health care, and educate *all* children in America free of cost at the point of service.”

Sometimes we take for granted exactly how radical ideas like Social Security, the VA, and public schooling really are: that we will care for our elders, provide healthcare, and educate *all* children in America free of cost at the point of service. https://t.co/thqD1u8VfY [2]

The progressive Ocasio-Cortez, 29, became a liberal starlet when she pulled off a stunning upset during the Democratic primary against 10-term incumbent Rep. Joe Crowley (D-N.Y.), the heavily funded chairman of the House Democratic Caucus.

Ocasio-Cortez, a former campaign organizer for Sen. Bernie Sanders (I-Vt.), is a member of the Democratic Socialists of America and worked as a bartender not too long ago.

The congresswoman joined climate change activists in a protest outside the office of now-Speaker of the House Nancy Pelosi (D-Calif.) during the first day of her freshman orientation on Capitol Hill back in November.