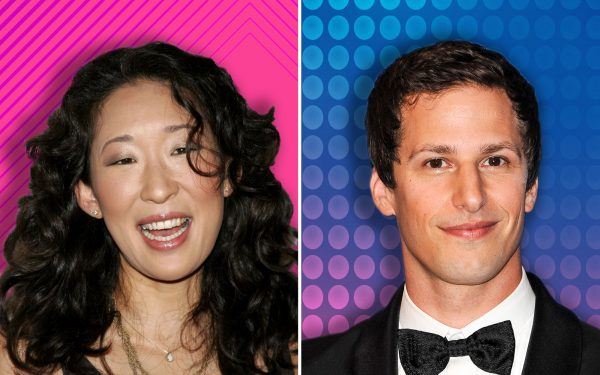 Politics, surprisingly, was not on center stage at the 76th Golden Globe Awards on Sunday night, but neither was entertainment.

It was extremely telling that when liberal entertainers avoid politics, they end up being an absolute bore.

It’s a catch 22 for pop culture lovers. Either people sit through the insufferable preaching of past Hollywood award shows — or viewers can see exactly how irrelevant and empty celebrities can be when left to their own devices and when they don’t go after President Donald Trump.

The latter was the case for this year’s Golden Globes. The show had impressive hosts in Andy Samberg (pictured above right) and Sandra Oh (above left). The former made people laugh when he was on “Saturday Night Live” — back when it still managed to score some laughs — and he continues to entertain on “Brooklyn Nine-Nine.”

Oh, on the other hand, is an impressive dramatic actress who was nominated the very night she was hosting.

But the two fell flat on their faces out of the gate with an empty opening monologue. They kept to an earlier promise and stayed away from politics, but they showed how limited many modern celebrities are when they have to “simply” entertain.

Gags by the two felt desperate and hackneyed. In one, they brought out people who appeared to be licensed nurses — to give flu shots to those in the audience.

Seriously. Things got that desperate at one point.

In another bit by the pair, they showed highlights from past award shows — that included them being honored at past shows. It was thankfully brief. Unfortunately, right after that the show returned to its boring proceedings.

Some filmmakers, as might be expected, could not resist the urge to get political.

“If Beale Street Could Talk” star Regina King pushed identity politics during her acceptance speech [2] and promised that her future projects over the next two years would include “50 percent women.”

“The Assassination of Gianni Versace: American Crime Story” producer Brad Simpson also warned about people pushing to build “walls around us” when he took the stage after his show won the award for Best Television Limited Series or Motion Picture Made for Television. He also urged the audience to “resist.”

“Resist in the streets and resist at the ballot box,” said Simpson.

“Green Book” director Peter Farrelly went in a different direction while he was on stage accepting the award for Best Motion Picture — Musical or Comedy for his film. The “Dumb and Dumber” director said his movie is for “everyone” — and he urged people to find “common ground” as the very different leads — played be Marshala Ali and Viggo Mortensen — in his movie do.

He said all people need to do is “talk” and not judge one another. The director added that no matter what people believe politically, everyone is looking to live freely and happily — and to be treated equally.

Carol Burnett was funnier and more relatable than anyone else to walk in front of cameras during the night.

Comedy legend Carol Burnett was a highlight of the night. The star injected the night with much-needed heart and humor when she accepted the first-ever Carol Burnett Award [3], a trophy meant to celebrate accomplishments in television.

Burnett spoke about her career, her passion for television, and the state of the modern-day entertainment industry during her speech.

She was funnier and more relatable than anyone else to walk in front of cameras during the night.

“Big Lebowski” and “Hell or High Water” star Jeff Bridges was another highlight. His career was honored with the Cecil B. DeMille Award and Bridges gave a moving speech about the power of the individual in a society. He never once touched politics and he again schooled younger talent by showing real passion for what he does on that stage.

For more on the Golden Globes and its disappointing hosts, check out the video below: