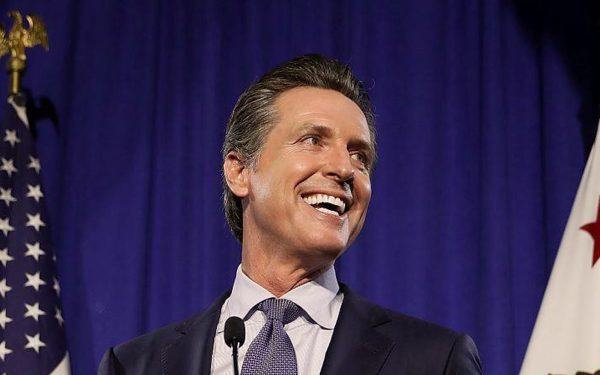 California Gov. Gavin Newsom didn’t waste any time picking up where his predecessor left off when it comes to criticizing President Donald Trump.

In his inaugural speech on Monday in Sacramento, Newsom, a Democrat, slammed Trump for his perceived “incompetence” and vowed that California would act as the vanguard in combatting the White House’s policies.

“There is an administration in Washington that is clearly hostile to California and California’s interests,” Newsom said.

“What we do today is even more consequential, because of what’s happening in our country,” he added during his address.

“People’s lives, freedom, security, the water we drink, the air we breathe — they all hang in the balance. The country is watching us. The world is waiting on us. The future depends on us. And we will seize this moment.”

Newsom, who is California’s 40th governor, takes over the post after serving as lieutenant governor under the Golden State’s former leader Jerry Brown. Under Brown, California led the nation in the battle against the Trump administration’s policies on everything from immigration to climate change.

“California has positioned itself as the center of the Trump resistance,” Jessica Levinson, a clinical law professor at Loyola Law School in Los Angeles, told Fox News. “It’s bloody combat.”

If Newsom’s comments during his inaugural speech are any indication, it appears the combat will continue [1].

“We will offer an alternative to the corruption and incompetence in the White House,” Newsom said.

“Our government will be progressive, principled, and always on the side of the people.”

$558 billion worth of goods flow across our America's southern border. BILLIONS of dollars — MILLIONS of jobs depend on our border.

The President of the United States playing games with our economy and threatening to shut down our border is irresponsible, irrational and absurd. pic.twitter.com/Y3zHsx7Jxg [2]

During his time on the campaign trail, Trump became an almost constant foil for Newsom.

In March, Newsom put out a campaign ad calling the president’s proposed border wall a “monument to idiocy” and referred to Trump as a “small, scared bully.”

And while Newsom thanks Trump for visiting the state following last fall’s deadly wildfires, he said that the president’s rhetoric made it difficult to work with him.

“We’re grateful that he came. We’re grateful for his time and attention,” Newsom said, according to the Sacramento Bee. “That said, we’re living in an environment, tweet by tweet, day by day, issues raise themselves to the fore. That makes it challenging for us to cooperate at all levels all of the time.”

Newsom, who won the governorship by a landslide, takes office amid a soaring state economy that has a projected $16 billion in reserves and an additional $14.8 billion unrestricted surplus.

He campaigned heavily on issues relating to housing, health care and education that could raise state spending [1] and, during his speech, Newsom promised fiscal responsibility to “prepare for uncertain times ahead.”

“We will be prudent stewards of taxpayer dollars, pay down debt, and meet our future obligations,” he said.

“We will build and safeguard the largest fiscal reserve of any state in American history.”

The midterm elections last November saw Democrats easily take control of not only California’s governor’s mansion, but also its state legislature with the party now holding a veto-proof majority in both houses.

Newsom, during his speech, attempted to also appeal to those conservative voters who feel disenfranchised by the election results.

“I intend to represent all Californians, not only those who voted for me,” he said. “I recognize that many in our rural communities believe that Sacramento doesn’t care about them — doesn’t even really see them. Well, I see you.”

Read more at Fox News:
Trump Calls Tlaib’s Impeachment Vow ‘Disgraceful,’ Says She ‘Dishonored’ Family and Country [5]
Mitt Romney Flip-Flops Again — Does He Even Know What He Is? [6]
DHS Sec. Nielsen Asked to Appear Before House Committee on Homeland Security [7]