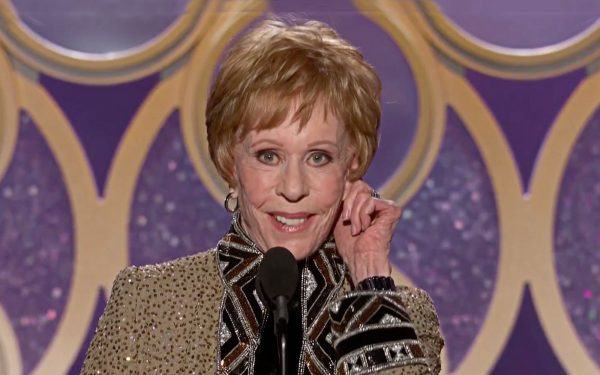 It became evident exactly how empty and irrelevant the 76th Golden Globe Awards were on Sunday night when comedy legend Carol Burnett took the stage.

Receiving the first-ever Carol Burnett Award — meant to honor accomplishments in television — the 85-year-old Burnett was brought onto the stage by “Office” star Steve Carrell.

Introducing Burnett, Carrell called presenting the award the “greatest honor” of his life.

Burnett, in turn, said Carrell is “as nice as he is talented” and she proceeded to inject some much-needed heart, humor and life into the Golden Globes.

While celebrities stayed silent about politics and President Donald Trump for the first hour, the show was empty and flat-out boring until Burnett took the stage. Hosts Andy Samberg and Sandra Oh tanked in their opening monologue and their later jokes fell flat.

One gag actually included having registered nurses let loose into the crowd to offer free flu shots … yes, things got that desperate.

Luckily, Burnett showed exactly why’s been a star all these years when she accepted her award.

“I’m really gobsmacked by this,” Burnett said, clearly emotional about receiving the award.

She then let out a simple joke that made other attempts at humor throughout the night look foolish.

“Does this mean I get to accept it [the award] every year?” said Burnett.

Teh comedy legend went on to describe falling in love with television when she was young and the deep honor she felt in accomplishing her “childhood dreams.”

She said she was smitten with how performers on television could “make people laugh or cry, or sometimes both.”

After speaking about her youth and still being “very proud” of the long-running “Carol Burnett Show,” the actress said, “I catch myself daydreaming about being young again.”

But she said those daydreams quickly disappear when she thinks about how lucky she was to create “The Carol Burnett Show” when she did — the show ran from 1967 to 1978.

Burnett added that the show simply wouldn’t be able to be made today — that the costs alone would be prohibitive.

The actress revealed that the series landed “at the right time,” a time that allowed it to use a live orchestra, and a variety of costume and cast changes per episode. Burnett said studios today are too fearful to back such a risky endeavor.

“Here’s to reruns and YouTube,” she said to roaring applause.

Viewers were brought to life by Burnett’s appearance and praised the actress on social media.

“Not a dry eye in this living room,” one user wrote while Burnett was speaking.

‘The mega-wattage stars hanging on every word of Carol Burnett’s acceptance speech for her lifetime achievement award, with smiles, tears and 2 standing Os [ovations], is everything,” added another.

The mega-wattage stars hanging on every word of Carol Burnett’s acceptance speech for her lifetime achievement award, with smiles, tears and 2 standing Os, is everything. #GoldenGlobes2018 [5] #CarolBurnett [1]

Yet another said, “Smarts, grace, talent, and at least 20 heart tugs in Carol Burnett’s acceptance/thank you speech.”

And as another viewer of the program said, “The entire show was empty and flat until Steve Carrell and Carol Burnett took the stage. It says a lot about a television awards show today when the star of the entire show is a star from yesteryear.”

Check out part of Burnett’s Golden Globes speech below: