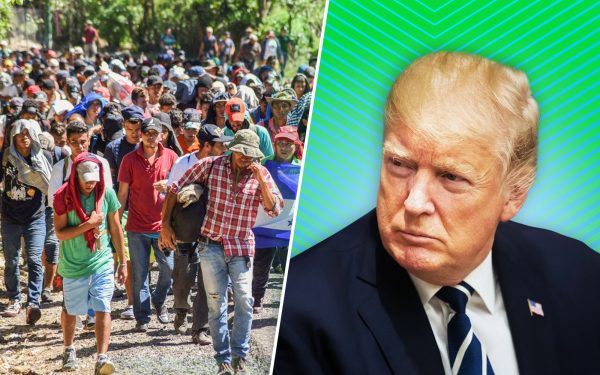 Those opposed to President Donald Trump’s drive to build a physical barrier on our southern border have been quick to assign him with immoral motives.

The wall is “an immorality,” said House Speaker Nancy Pelosi (D-Calif.) — while giving scant justification for the statement.

Beyond the fact that Pelosi and many of her fellow left-wing plutocrats live on lavish estates protected by walls, a fortified barrier would be a great asset to save lives on both sides of the southern border between the U.S. and Mexico.

As they and most informed Americans believe, to forgive things like the DACA aliens’ mass theft of Americans’ Social Security Numbers [1] (stolen mostly from American children) in order to illegally work and obtain benefits is, to borrow Pelosi’s favorite line of late, ”not who we are as a nation.“

To be sure, advocates still want their wall. And with Democrats apparently concerned more with early-presidential campaign politics — i.e., making sure Trump can still be blamed for ending DACA come 2020 and that he loses some of his wall-loving base — given the highly critical situation at our border, the president may have no choice but to declare a national emergency and fund the wall unilaterally.

The Heritage Foundation’s constitutional center recently laid out the legal case [2] for doing just that. Its conclusions are supported by additional sources found here [3] and here. [4] As for the facts supporting such a declaration, they are indeed vast.

A border wall expansion, if targeted right, would likely save thousands of illegal immigrants’ lives. Low estimates from the Border Patrol between 2000 to 2014 put deaths attributed to unlawful border crossing at over 6,000 [5] — and that’s just along the border. Without plugging the gaps abused by migrant-smugglers, migrants will keep on coming, and so will the deaths.

As for the cartels that control migrant smuggling, 10 percent of their finances are now attributed to this source. In years past, it was small mom-and-pop operations in villages along the border that facilitated the crossings. As Border Patrol friends of ours have told us, cartels carefully coordinate people-trafficking with drug-trafficking in order to divert border agents from foiling the latter. The drugs that make it into the country this way (that is, between ports of entry) now account for around 20 percent of all illicit drug imports — with the remainder going through sea and airports.

And the effects of this sort of trafficking are nothing short of horrific. Although the opioid crisis has been receiving national attention since 2014, it has only gotten worse. That year, 47,000 Americans died from drug overdoses [7], including 21,000 deaths from opioids (like fentanyl) and 10,000 from heroin, both of which are primarily sourced from Mexico.

Two years later, 64,000 Americans [8] had similarly died — a number that eclipsed the number of Americans who died in the Vietnam War. In 2016, opioids became the leading cause of death for men under 50, and analysts found that because of the extent of the crisis, the average life expectancy of the country actually experienced a decline. That’s something that hadn’t happened in several decades.

Although it is difficult to pinpoint how much impact expanding the “stupid” wall would have, it’s entirely reasonable to say its effect on reducing the illicit migrant- and drug-smuggling trade would probably save thousands of lives.

Pelosi has refused to attack other countries that erect walls as “immoral.” Last year, she even committed U.S. taxpayers to help pay for a wall in Jordan.

Surely, influential Democrats know all of this — everyone from the drug-policy and immigration-policy staffers in the Democratic leadership offices to the mainstream media reporters who used to say our border was in crisis.

And surely most informed conservative and independent voters know they know.

They also notice things like Pelosi’s refusal to attack other countries that erect walls as “immoral.” Last year, she even committed U.S. taxpayers to help pay for a wall in Jordan [9].

Among those voters who also happen to know that the areas of the country hardest hit by the opioid crisis actually supported Trump in 2016, would they be too cynical for thinking that Democrats simply aren’t all that concerned about it and would rather just play electoral politics?

To Pelosi, they should ask: Are we a nation that puts party politics ahead of saving lives? Who’s really being immoral here?

Dale L. Wilcox is executive director and general counsel at the Immigration Reform Law Institute [10], a public interest law firm working to defend the rights and interests of the American people from the negative effects of mass migration.