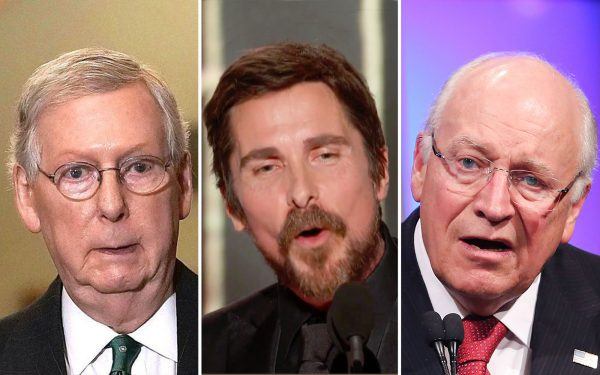 The 76th Golden Globe Awards kept away from politics for the first hour or so — but then it was off to the races.

After actress Regina King pushed identity politics and promised that every project she worked on for the next two years would include “50 percent women,” [1] actor Christian Bale took the stage and decided to go after Dick Cheney, the former vice president, and Sen. Mitch McConnell (R-Ky.) with some cheap and throwaway lines.

Bale was onstage to accept the award for Best Actor in a Motion Picture — Musical or Comedy for “Vice.”

Bale actually plays Cheney in the film — he even gained nearly 50 pounds for the role. [2]

Bale began his talk on the stage by saying his wife warned him to say less than usual and to not offend or turn off segments of the audience.

Bale proceeded to do just that when he exclusively attacked Republicans.

The actor said Cheney is “charisma free” — interesting since a large group of people made an entire movie about him — and he thanked Satan himself for giving inspiration to the role.

“Thank you to Satan for giving me inspiration on how to play this role,” Bale said.

Bale joked that he may be the go-to actor for “charisma-free” politicians. He said Sen. Mitch McConnell (R-Ky.) could be next.

“What do you think, Mitch McConnell next? That could be good,” said Bale.

He then joked he would say less for fear he would alienate some people — and he proceeded to alienate half the audience.

It’s unfortunately too typical of an attitude in modern Hollywood.

Burnett, in a moving speech, explained her inspiration to get into television, how proud she is of “The Carol Burnett Show,” and her opinions on the entertainment industry as it is today.

Comparing her speech to Bale’s speech shows just how far Hollywood has fallen.

He has also starred in such hits as “The Big Short,” “American Hustle” and “Public Enemies.”

Check out a trailer for “Vice” below: