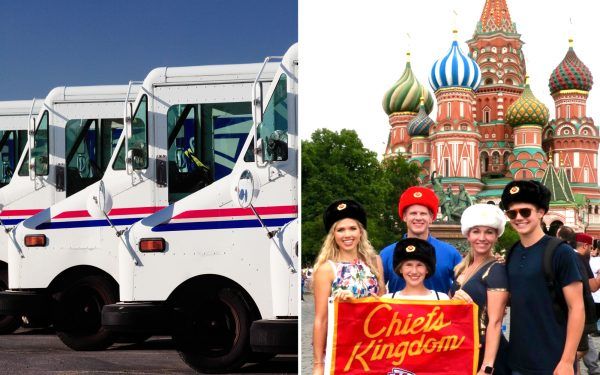 Tavia Hunt, wife of Kansas City Chiefs owner Clark Hunt, wanted a customized stamp with a photo of her family outside St. Basil’s Cathedral in Russia for her Christmas cards this year.

She was shocked to learn the United States Postal Service would not grant her wish.

Now she is challenging the legality of its denial. [1] She’s demanding an explanation and threatening legal action.

The site Stamps.com rejected her custom-designed stamps request and canceled her order a few days after she placed it.

The rationale she claims she received for the cancellation is that she violated a 2017 USPS stamp policy that says [2], “Acceptable … images or text must not contain content that is unsuitable for all ages, audiences, including any depiction of political, religious, violent or sexual content.”

When Hunt initially reached out to Zazzle — the site to which she uploaded the picture — it recommended she contact Stamps.com instead.

When she did, the site claimed it deleted her order because the photo had an unauthorized use of the Kansas City Chiefs logo and because Hunt and her family were holding a banner with the logo outside of a prominent church.

Still, Hunt proved she had the right to use the logo. And on December 10, Zazzle confirmed to her via email that the rejection came “due to the prominence of St. Basil’s Cathedral on the background.”

Zazzle also said it would be willing to fulfill the order if she cropped the church out of the photo.

Hunt is not interested in that offer. Instead, she’s arguing such a policy violates the First Amendment.

Attorney Hiram Sasser, who is representing Hunt in the case, weighed in on the situation on Fox News’ “The Ingraham Angle” on Thursday night.

“That’s the problem with these postal regulations,” he said. “They’re so broad in prohibiting anything religious at all that they would encompass a cathedral in the background — even if it’s not being used as a cathedral anymore.”

Host Laura Ingraham also did not agree with the logic Zazzle and Stamps.com gave to Hunt.

“Under what constitutional norm are they operating?” she asked. “This is not establishing a state religion — even by the most amorphous, squishiest of tests that the Supreme Court established. It seems like it would fit right into someone’s First Amendment rights in the Constitution. You can have a picture at Hooters, and that’s OK, but you can’t be in front of a little cathedral. I don’t even understand the argument.”

He appears to be correct about the postal service’s selling religious stamps despite its policy.

The USPS website explains [3] it produces Nativity scene stamps and Hanukkah-themed stamps, both of which are religious in nature.

Check out the segment from “The Ingraham Angle” below: