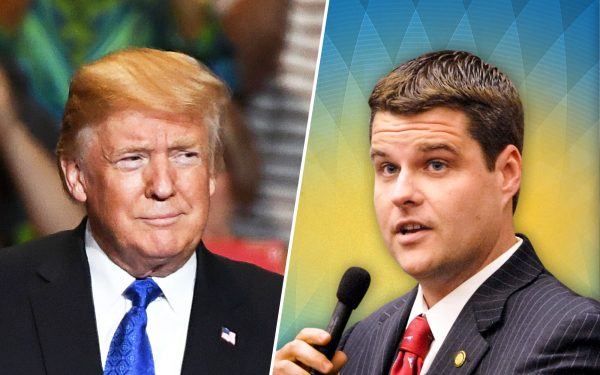 Rep. Matt Gaetz (R-Fla.) said on Sunday he is confident President Donald Trump will endure the political hardships of a government shutdown in order to get the border wall funding needed to protect America’s security.

Trump has fought to secure $5.7 billion to fund a security wall along the southern border.

Democratic leaders have instead refused to give him any funding for the wall.

The stalemate led to the government partially shutting down [1] despite lawmakers’ attempts to work out a late deal on Friday.

“We’ve shut down elements of the government [2] because he’s this serious about it,” Gaetz said on Fox News following a lunch meeting on Saturday with the president.

“As we roll deeper into the shutdown, I think that the Democrats will experience more pain than the Republicans.”

Gaetz added that the president is prepared to be in the shutdown standoff for the long haul. Vice President Mike Pence, along with Reps. Mark Meadows (N.C.), Jim Jordan (Ohio) and Andy Biggs (Ariz.), also attended that meeting with the president.

Gaetz said the president told them at the meeting he wouldn’t sign “a bad deal.”

Congress made the partial government shutdown essentially inevitable when both chambers moved to adjourn late Friday.

Senate Majority Leader Mitch McConnell (R-Ky.) tried to avert the shutdown by introducing a continuing resolution a few days prior to keep the government funded [4] at current levels until February 8.

The Senate quickly passed the continuing resolution on Wednesday before it moved along to the House.

But that version of the bill was derailed soon after facing internal opposition. The House Freedom Caucus argued from the floor against the bill [5] — and urged a fight for border wall funding on Wednesday.

Trump seemed ready to take the blame for the shutdown in the name of border security during a contentious meeting with Democratic leaders on December 11. But he later argued the Democrats would be at fault if they didn’t vote for border security.

Senate Minority Leader Chuck Schumer (D-N.Y.) responded by putting the blame on him.

Related: ‘Very Possible Shutdown Will Go Beyond the 28th, into the New Congress’ [1]

Trump has rejected both counter offers.

White House acting chief of staff Mick Mulvaney said the shutdown could last into [6] the New Year. He also chastised Democratic leaders for lowering their counter offer [6] instead of negotiating in good faith.

Mulvaney was serving as director of the Office of Management and Budget until he was picked for the chief of staff job on December 14.

“It’s very possible this shutdown will go beyond the 28th [of December] and into the new Congress,” which begins on Jan. 3, 2019, Mulvaney told Fox News host Chris Wallace on Sunday.

“It’s not a surprise to anybody,” Gaetz added, “because it’s exactly what the [6] president said he was going to do.”