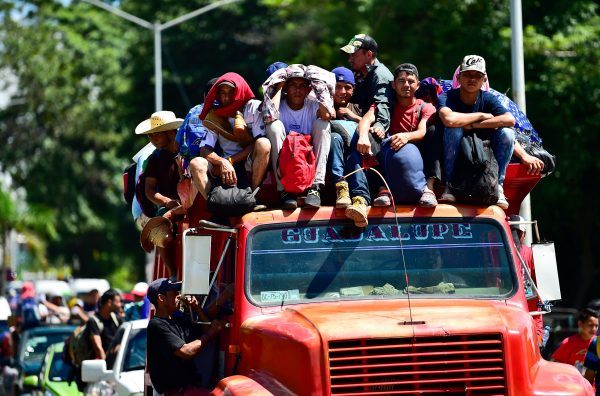 The U.S. Supreme Court ruled against a Trump administration ban on asylum seekers on Friday related to those who have illegally crossed the border.

President Donald Trump announced the plan to automatically deny asylum to people who enter the country illegally in November.

Chief Justice John Roberts joined the four liberal justices on the court, which split the ruling [1] five to four against the president, reported the Associated Press.

Neither side issued an opinion explaining its reasoning.

The Supreme Court decision leaves in place a lower court ruling that blocked the policy change.

The proposed rule would have essentially meant any migrant not entering through a legal point of entry would be ineligible for asylum.

The move was to confront those who request asylum only after getting caught in the country illegally.

Related: U.S. Will No Longer Allow Asylum Seekers to Stay While Claims Are Processed [2]

President Donald Trump has worked to crack down on illegal immigration since the start of his term. But a surge of asylum seekers towards the southern border this past year has made the challenge even tougher. His administration has tried to tackle the issue in various ways, including making asylum seekers wait in Mexico.

Secretary of Homeland Security Kirstjen Nielsen announced Thursday that asylum seekers will no longer be able to wait in the country while their claims are being processed.

The administration argues that current policies allow those that don’t have a legitimate claim to cheat the system since they are often let free to await a future court date.

“Aliens trying to game the system to get into our country [3] illegally will no longer be able to disappear into the United States, where many skip their court dates,” Nielsen said in a statement. “We will undertake these steps consistent with all domestic and international legal obligations, including our humanitarian commitments.”

Related: Hunterdon County Is Not Going to Be a Sanctuary County ‘as Long as I’m Sheriff’ [4]

Trump is left with few options given the current legal landscape. Federal immigration laws allow the president to suspend the entry [5] of all aliens or any class of aliens.

But some critics claim he is beholden to international agreements to process credible asylum claims.

Trump also attempted an earlier crackdown on illegal immigration that resulted in children being separated from the adults who illegally brought them into the country.

Many of the illegal immigrants had children with them when asking for asylum.

But that process can often take longer [6] than the 20 days immigration officials are allowed to hold children.