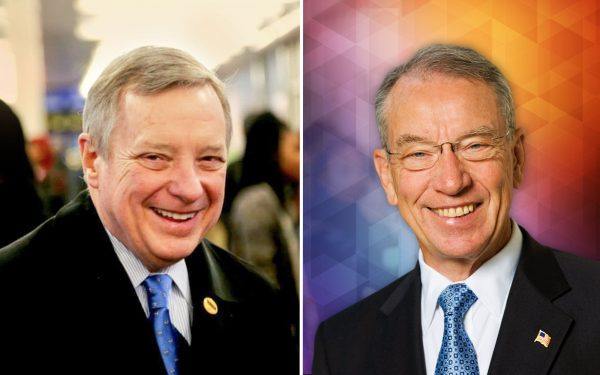 Senators took a major step toward enacting criminal justice reform on Tuesday night by passing a bipartisan bill with an 87 to 12 vote.

The First Step Act is designed to reform the criminal justice system [1] in a way that helps inmates leave jail and their criminal lives behind.

The bill is meant to incentivize inmates to participate in programs aimed at helping them re-enter society. The Senate’s passage of the bill means it now moves to the House for consideration.

Sens. Chuck Grassley (R-Iowa) and Dick Durbin (D-Ill.) have been leading efforts to pass the bill [2] since introducing it back on November 15.

They have been joined by a bipartisan coalition [3] of lawmakers. President Donald Trump has also been very involved in support [4] of the bill and has helped build up pressure to bring it to a vote.

“Historic criminal justice reform happens once in a [5] generation. Now on its way 2 House & Pres Trump waiting w a pen to sign.”

The First Step Act encourages inmates to participate in programs that help them stay away from crime.

The inmates can then earn credits that reduce the amount of time spent in prison in return.

Senate Majority Leader Mitch McConnell (R-Ky.) had resisted calls to bring the legislation up for a vote. Republicans have a lot on their plates, with little time to get things done before control splits between the two parties when the new session of Congress starts on January 3.

But he eventually relented [7] last week amid mounting bipartisan pressure.

The First Step Act has seen rare alliances among political rivals who share support for the bill. The legislation has been supported by [8] liberal and progressive groups, such as the Leadership Conference on Civil and Human Rights and the American Civil Liberties Union (ACLU).

But it has also been backed [9] by more conservative and libertarian groups, such as Right on Crime and Freedom Partners.

“America is in the midst of a mass incarceration crisis, and the passage of this bill will help send an important message to the rest of the country about the urgency of addressing that crisis,” ACLU deputy legislative director Jesselyn McCurdy said in a statement on December 11. “We applaud the bipartisan group of senators who have listened [10] to advocates by strengthening the First Step Act with important sentencing reforms.”

The act has seen some opposition as well, despite its bipartisan support. Arizona Voice for Crime Victims, Force 100 and other victim rights groups have argued the bill [11] will result in reduced sentences for violent criminals. Sen. Tom Cotton (R-Ark.) has been very vocal in his [12] opposition to the bill as well.

Related: Trump on Criminal Justice Reform: ‘It Has Tremendous Support No Matter Where We Go’ [4]

Sen. John Kennedy (R-La.) and Cotton introduced an amendment to the bill [13] on December 11 that would specifically forbid violent criminals and sex offenders from qualifying for early release programs. They argued the bill in its current form undermines public safety and puts the rights of criminals before victims.

“The First Step Act is a violation of American public safety, but this amendment addresses [14] some of the major shortfalls in the legislation,” Kennedy said in a statement on December 14. “This is not a criminal justice bill. It is a prisoner release bill. We should be protecting victims of crimes and not the offenders who committed the crimes. I don’t think the bill represents justice, but I think our amendment will fix some of the issues with the legislation.”

The proposed amendment could also require prison wardens to notify victims before an offender gets an early release.

It also includes a measure to track the effectiveness of anti-recidivism programs. The Brennan Center for Justice at the NYU School of Law argued against the proposal as a “poison pill” amendment that would weaken [15] the bill.

There is not a single benefit in the bill for the victims of these criminals.

The U.S. Department of Justice found that an estimated 2,162,400 people were being incarcerated in federal and state prisons and county jails in 2016.

The rate fell for nine consecutive years prior to that point, [17] but still represented 830 of every 100,000 adults in the country.