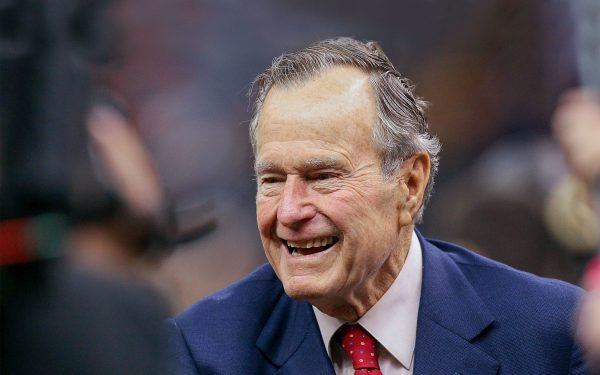 These days, I almost hate to pick up a paper or turn on the television set. Too often, I read or see that another good man or good woman, who had so much good to give their country, has passed away.

A dear friend, Sen. Paul Laxalt [1], passed away recently. Another cherished friend, Sen. Richard Schweiker, also passed away not too long ago. Both men figured greatly in the annals of the life and times of Ronald Reagan, but they were both great men themselves; both served in the Navy in the Pacific in World War II.

A man who was in some ways my mentor, Vic Gold, who was a close and personal friend of the elder Bush, wrote speeches for him, served as a confidential adviser to him and wrote a biography of the 41st president, also recently passed.

Arthur Finkelstein was another close friend and mentor who passed away.

Like many conservatives, I was skeptical of George H. W. Bush [2]. I’d been a supporter of Ronald Reagan for years and ran an independent campaign supporting the Gipper over then-Ambassador Bush in the 1980 GOP primaries.

Reagan won the nomination but then again, conservatives were dismayed over the selection of Bush at the Detroit convention in 1980.

Had Reagan not chosen Bush (reluctantly, as both he and Mrs. Reagan wanted Laxalt after first flirting with former President Gerald R. Ford) as his running mate, it is possible Bush would have faded into obscurity. No one will ever know. But his selection by Reagan turned out to be the best and the wisest first decision by the 1980 GOP nominee.

Bush had come in second to Reagan in contesting the nomination, had won the primaries in the big industries states of Pennsylvania and Michigan, had more foreign policy experience than Reagan, and was more moderate than Reagan. But his choice produced a unified convention.

Reagan came to Bush very skeptically, very reluctantly. After Bush’s disastrous performance in the Nashua debate (“I paid for this microphone!” Reagan thundered) and after a series of other incidents — including Bush’s constantly jogging for the media to put the spotlight on Reagan’s age, 69 — there was deep and bad blood between the two men and the two women, Barbara Bush and Nancy Reagan.

But Bush proved an adept fall campaigner and Reagan’s respect for him grew. And when Reagan was shot (and nearly died) in March of 1981, again Bush rose to the challenge by not seeking the limelight for himself.

While Secretary of State Al Haig was nervously hosting an ill-considered press conference at the White House and incorrectly cited the Constitution (“I am in charge here!”), Bush was in the air over Texas when he got word about the assassination attempt.

Upon landing at Andrews, his staff urged him to take a helicopter and land on the South Lawn of the White House. Bush refused, stating that only the president landed at the White House.

He motorcaded into D.C. and kept a low but important profile. He visited Reagan often at George Washington University Hospital.

Reagan later rewarded Bush by taking away the chairmanship of the National Security Council from Al Haig and awarding it to his vice president.

In 1985, Reagan was the first chief executive to transfer presidential authority temporarily, which he did to Bush under the 25th Amendment, as Reagan was going in for surgery and would be anesthetized. Bush kept his cool, kept a low profile, and kept Reagan’s confidence and the confidence of the American people.

Bush was at his best when things were worst. Bush brings to mind the wonderful poem “If” by Rudyard Kipling: “If you can keep your head…” One passage reads, “If you can talk with crowds and keep your virtue, Or walk with kings — nor lose the common touch.” That was George H.W. Bush.

Early on, we established a small bond as my uncle, Ellsworth Abbott “Barney” Shirley, flew the same plane — a Grumman TBF 1 Avenger — as did Bush in the Pacific. Fortunately, after being shot down, Bush came home. My uncle, after being shot down, did not. We once spoke about the toll Barney’s death took on my family and he was visibly moved.

“Grace under pressure.” That was one of President Kennedy’s favorite phrases. And it certainly applied to President George H.W. Bush.

During the week of the Reagan funeral, as we gathered at the National Cathedral in Washington, former President Bush gave the eulogy. He was poignant, historical, funny, reassuring, calm.

I recall the first handwritten note I received from Bush. It is framed and I am looking at it now. Several dozen notes later, we kept them all and treasure them all.

My job now is to report on history but Bush’s job was to make history. And indeed he did.

Another page of history is turning and President George H.W. Bush’s stately ship of state is making a new and everlasting port.

Craig Shirley is a presidential historian and Reagan biographer, having written four books on the 40th president, including the widely acclaimed “Rendezvous with Destiny,” [4] a minute-by-minute account of the fight between Ronald Reagan and George H.W. Bush for the 1980 GOP nomination and their unlikely pairing at the party convention in Detroit, as well as the fall campaign and the stunning victory of Reagan and Bush.