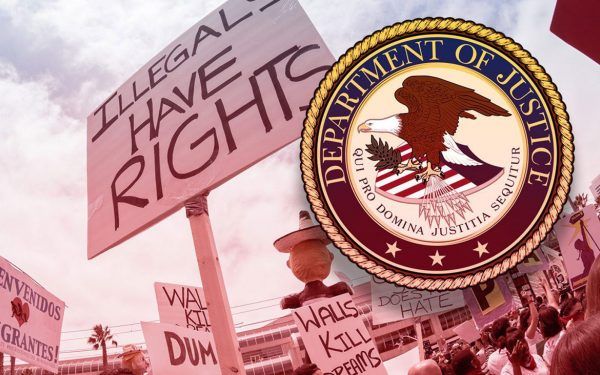 A California sheriff whose officers were led on a wild chase earlier this week by a twice-deported illegal immigrant killer says cops are “very frustrated” with sanctuary state laws preventing them from working with Immigrations and Customs Enforcement agents.

The comments from Tulare County Sheriff Mike Boudreaux come following the death of Gustavo Garcia, a 36-year-old who police say embarked on a “reign of terror” by robbing a convenience store, shooting and killing a person. and firing at buildings before crashing a truck that he had stolen.

The day-long crime spree [1] that began Sunday in the Fresno area also left five injured, including one critical, and Lindsay Police suspect Garcia was involved in an additional murder there.

During the chase Monday that ended in the crash that left Garcia dead, he drove the wrong way at speeds of up to 100 mph and hit four other cars — something that he appeared to have done on purpose, police said.

“We are very frustrated with the fact that the way the laws are set up currently that law enforcement hands are tied,” Boudreaux said Wednesday, noting that in years past, Garcia — who had been in police custody shortly before the rampage — would have been handed over to ICE in cooperation with them.

The immigration agency says it placed a detainer on Garcia last week after he was arrested on a misdemeanor charge of being under the influence of a controlled substance [2].

But Boudreaux said he had no choice but to let Garcia go since state law prohibits him from honoring that request unless ICE obtains an arrest warrant with the signature of a federal judge.

“Gustavo Garcia in times past would have been turned over to ICE officials. Even though it was a misdemeanor charge, they placed a detainer on him. That detainer can no longer be recognized,” Boudreaux said.

“That’s how we did it in the past and that’s how we had always done it. And now, that tool has been taken from law enforcement,” Boudreaux continued. “After [the passage of] SB-54 we no longer have that power.

“That tool has been removed from our hands and because of that our county was shot up by a violent criminal that could have easily been prevented had we had the opportunity to reach out to our fellow counterparts,” he added.

Senate Bill 54, enacted in September last year by state Democrats on a party-line vote, was drafted on the premise that undocumented immigrants would feel safer going to police to report crimes and aid in investigations if they didn’t have the risk of detention, according to The Washington Post.

Boudreaux says he doesn’t disagree with all elements of California’s sanctuary policies [4], as he supports DACA, Dreamers and not using police to enforce immigration laws.

But he said he hopes lawmakers in Sacramento “are paying very close attention that local law enforcement is very frustrated.”

“The law the way it’s written needs a couple changes,” Boudreaux said. “We need some tweaking within that law.”

“Garcia-Ruiz served 27 months in federal prison for re-entering the country prior to his second removal,” the ICE statement said.

“On Dec. 14, 2018, ICE lodged an immigration detainer on Garcia … However, that detainer was not honored and he was released from custody later that day without any notification to ICE,” it added.

“This deadly rampage could have been prevented if ICE had been notified of his release. This is an unfortunate and extremely tragic example of how public safety is impacted with laws or policies limiting local law enforcement agencies’ ability to cooperate with ICE.”

Boudreaux said Garcia’s crime spree earlier this week was the second time an undocumented person committed serious acts of violence in his county recently, referencing the 2016 disappearance of Cecilia Bravo [7], believed to have been killed by her husband.

Garcia also has a lengthy criminal record that dates back to 2002, including charges for illegal firearm possession and meth, according to the Fresno Bee.

Fox News’ Ryan Gaydos contributed to this Fox News [8] report, which is used by permission.

Read more at Fox News:
Top Republican Predicts Flynn Guilty Plea Will Be Thrown Out [9]
Stormy Daniels Ordered to Pay $292K for Trump’s Legal Fees [10]
Greatest Christmas Gift I Can Think Of (Not What You Would Expect) [11]