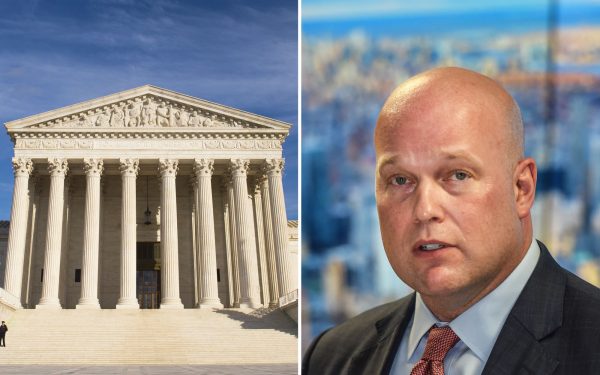 The U.S. Commission on Civil Rights doesn’t have the legal authority to operate given that congressional approval for it expired decades ago, a letter sent Thursday to the acting attorney general warned.

The Civil Rights Commission has been tasked with investigating and making recommendations about civil rights issues since it was created back in 1957.

But the commission has continued to operate despite the expiration of its authorization. The Competitive Enterprise Institute (CEI) [1] is now asking Matt Whitaker (shown above right) to look into it.

“All we are asking the acting attorney general to do is apply the law passed by Congress and signed by President [Bill] Clinton,” CEI attorney Devin Watkins said in a statement provided to LifeZette.

“It appears the U.S. Commission on Civil Rights is the only agency that has no substantive statutory authority for its continued existence. In a nation that respects the rule of law, not men, no agency, regardless of the merits of its mission, should be allowed to operate outside the law.”

CEI is a free market and libertarian think tank that has often called out runaway or bloated federal agencies.

The Civil Rights Commission is a unique case in that all of its statutory authority to exist expired back in the mid-1990s. Congress has not passed new legislation to reauthorize the commission since then — but has continued to include it in appropriations bills.

The Civil Rights Commission Amendments Act of 1994 was the last time the agency was reauthorized via the measure, including a two-year expiration. The U.S. Congress could have reauthorized the commission at any time over the past two decades. The most recent appropriations bill allocated $9,700,000 to the commission without reauthorizing it.

CEI formally requested in its letter that the acting attorney general determine that the commission has no legal authority to carry out its activities.

CEI stresses its request is not based on any disagreement with the commission, but rather wants to uphold the rule of law. The Civil Rights Commission was the only federal agency it could find in operation whose entire statute has expired.

The letter notes that if lawmakers want to reauthorize the commission, they should and could easily do so.

The group also requested that Whitaker notify the U.S. Department of the Treasury that its disbursement of funding to the commission was illegal.

“The Commission is continuing to operate and spend taxpayer money without the authority to do so,” stated the letter, which was shared with LifeZette. “This is contrary to law. The Commission’s operations should be halted unless, and until, its existence is once again properly authorized by Congress.”

CEI requested that the attorney general authorize it to bring a quo warranto lawsuit to address the matter if he decides not to act directly on it. A quo warranto proceeding requires a challenged person or agency to show what authority it has.

The U.S. Supreme Court already ruled on a similar matter in a 1990 case, Office of Personnel Management v. Richmond. The case involved a Navy veteran who accidentally took more government benefits [2] than permitted and was denied any more of them for six months. The ruling in the case found payments from the federal Treasury are limited to those authorized by statute.