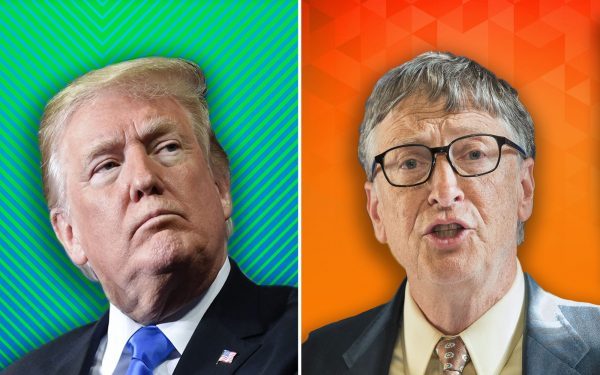 “Fortunately the Congress took that proposal [to cut the USAID budget [1]], which would have meant cutting people off from those HIV medicines, and they decided to maintain the foreign aid levels,” Gates told “Fox News Sunday” host Chris Wallace in an interview that aired Sunday morning.

The interview with Gates took place on Tuesday at the U.S Chamber of Commerce in Washington, D.C.

Gates also addressed the statement by his wife, Melinda Gates, that she was disappointed about the “deteriorating” U.S. leadership and “egregious things that have been said by this current administration.”

Bill Gates contended the president’s America First maxim does not preclude the country’s engagement in countries like Africa.

Instead, he argued that humanitarian efforts outside the U.S. fall within the broad definition of maximizing the nation’s benefit.

“Even in that narrow framework of, OK, I only care about what, how U.S. citizens do — even in that framework, these institutions, these alliances, these investments in innovation are overwhelmingly smart things to do,” he said. He was referencing efforts — including those connected with working on an HIV vaccine — to help stop the AIDS crisis in Africa and elsewhere.

On the issue of climate change, Gates predicted that for countries like Africa — which are “completely dependent on the rain coming” — climate change presents a “threat to … survival.”

He also predicted “millions of deaths because of climate change between now and the end of the century.” He said a significant portion of that count will be in “very, very poor countries, because of the subsistence farming.”

He explained that in Africa in the past, for example, failed harvests occur about once every 12 years.

With climate change, Gates predicted the failed harvest rate will be closer to one in four.

Gates encouraged the current players in big tech to learn from the naiveté of his early years, during which he “bragged” about not having an office in Washington D.C. — a decision he said he “later came to regret.”

Wallace asked Gates about the growing backlash in Washington against big tech.

“Yes, the government should be talking to these companies about what they do,” said Gates, addressing the merits of Washington’s contention that big tech is exhibiting political bias and is doing too little to protect user privacy.

Gates encouraged the current players in big tech to learn from the naiveté of his early years, during which he “bragged” about not having an office in Washington D.C. — a decision he said he “later came to regret.”

“I’m sure these guys are learning better than I did, that they need to come back here and start a dialogue, and there will be new types of regulation for these companies,” he added.

Gates waxed philosophical on Microsoft’s edging out Apple as the most highly valued company in the world in terms of market capitalization.

Microsoft took the lead at $800 billion, with Apple nipping at its heels with $799.5 billion.

“It’s really better to define yourself by an aspiration,” said Gates, specifically noting the use of software to improve education and to contain the soaring costs of medical care in the United States.

“So yes, I’m very proud of Microsoft and the vision that software and technology would make a big thing. You know, it’s led to the most valuable, the five most valuable companies, being these tech companies. So I do think it’s a vindication of the importance of technology, which now is coming with a lot of responsibilities as well.”

Bottom up means someday someone might have a better idea than him but top down means he gets to tell people what ideas they are allowed to have.

Gates was extremely successful in information technology. Doesn’t make him a scientist or pro athlete or opera singer. Get people who know the subject.