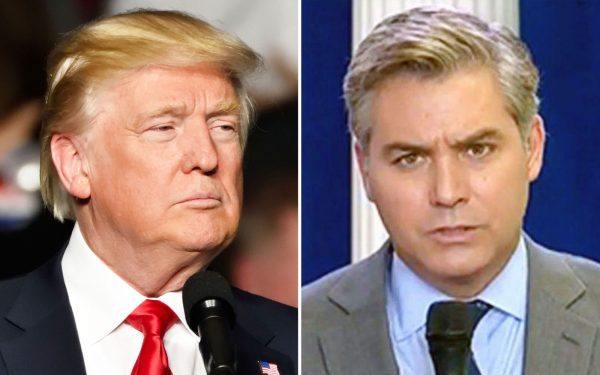 A federal judge ordered that the White House must return — immediately and temporarily — the press pass of CNN’s Jim Acosta, Fox News reported.

A hearing is still ongoing; the network reported the breaking news at 10:30 a.m. on Friday morning.

“The order to restore Acosta’s access came from Judge Timothy Kelly, appointed a year ago to the federal district court in Washington, D.C., by President Donald Trump,” as NBC News also noted. “He said the White House must give the credential back temporarily in order to give Acosta a chance to persuade the administration that he should be allowed to keep it.”

Acosta himself made a brief statement to the media and thanked others for their support. (Fox News had sided with CNN.)

Yet New York Times best-selling author Brigitte Gabriel, even before Friday morning’s action from the judge, strongly believes that President Donald Trump does not owe anyone a free pass to the White House briefing room.

In a chapter of her new book, “RISE: In Defense of Judeo-Christian Values and Freedom,” [1] called “Lamestream Media,” Gabriel writes that the mainstream media as an institution are riddled by group-think — and that one radical leftist ideology controls the news. The book was published on September 11 by FrontLine, an imprint of Charisma House [2].

“CNN’s lawsuit over the revocation of Jim Acosta’s White House press pass displays clearly just how clueless the Left is about the Constitution, as well as how readily willing they are to throw a childlike fit when they don’t get their way,” Gabriel [3] said in a statement shared with LifeZette about the ongoing legal battle.

“The Constitution provides Jim Acosta the right to report what he wishes about the president, even if ridden with the usual leftist lies and smears.”

But “what the Constitution does not do,” she also said, “is demand that the White House accommodate anyone who demands access to the president or Sarah Huckabee Sanders.”

She also said that CNN as a network should “show some respect for the Oval Office and those who occupy it.”

Here are some other opinions and news items related to this, as posted on Twitter:

The First Amendment protects your right to say and write anything you please about this or any other President.

CNN filed a lawsuit earlier in the week [13] against President Trump and several of his aides. The network sought the immediate reinstallation of Acosta’s media access to the White House and to the press briefings.

In a statement, CNN said it “demands the return of the White House credentials of CNN’s Chief White House correspondent, Jim Acosta. The wrongful revocation of these credentials violates CNN and Acosta’s First Amendment rights of freedom of the press, and their Fifth Amendment rights to due process. We have asked this court for an immediate restraining order requiring the pass be returned to Jim, and will seek permanent relief as part of this process.”

The lawsuit was in response to the White House’s suspension of Acosta’s press pass, known as a Secret Service “hard pass,” last week.

The lawsuit — filed in U.S. District Court in Washington, D.C., on Tuesday, which listed both CNN and Acosta as plaintiffs — is alleging that the First and Fifth Amendment rights of both Acosta and CNN are being violated by the ban.

During a recent exchange with the president, Acosta repeatedly interrupted Trump, tried to lecture him about the approaching migrant caravans from Central America, refused to turn over the mic to other reporters when a White House intern tried to take the mic, and even engaged in a bit of tug-of-war with her over the microphone.

Trump called the CNN correspondent “a rude and terrible person.”

The reporter continued to press and interrupt the president about his characterization of the migrant caravan as an invasion.

“CNN should be ashamed of themselves [for] having you work for them. You are a rude and terrible people and you shouldn’t be working for CNN. You are a very rude person,” the president also told him.

In announcing the lawsuit, CNN also said, “While the suit is specific to CNN and Acosta, this could have happened to anyone … If left unchallenged, the actions of the White House would create a dangerous chilling effect for any journalist who covers our elected officials.”

The reporter continued to press and interrupt the president about his characterization of the migrant caravan as an invasion.