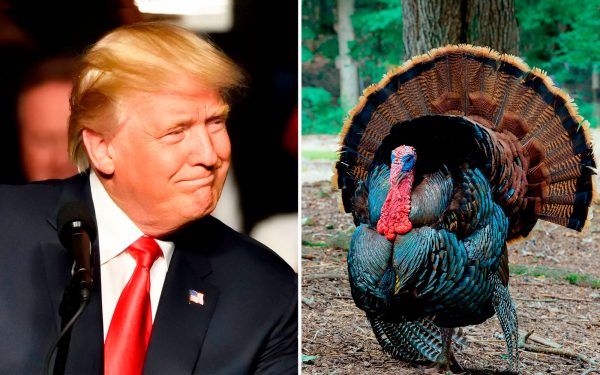 President Donald Trump honored an American tradition and pardoned a lucky turkey on Tuesday during the annual White House turkey pardon, although he joked that House Democrats could issue both finalists subpoenas after retaking the House in the midterm elections.

The presidential turkey pardon unofficially dates as far back as Abraham Lincoln’s presidency.

George H.W. Bush truly cemented the formal pardoning tradition in 1989. Both Trump and first lady Melania Trump participated in the ceremony in the Rose Garden.

The two turkey finalists — Peas and Carrots — will both live out the rest of their days at Virginia Tech’s Gobbler’s Rest exhibit following Tuesday’s pardoning. They also represent “the very first national Thanksgiving turkeys from the very great state of South Dakota,” the president noted.

“Thanksgiving is a time of great American traditions, and today we continue a very special one when a lucky turkey gets a presidential pardon. That turkey is so lucky. I’ve never seen such a beautiful turkey,” Trump said.

Trump noted that Peas narrowly edged out Carrots in the pardoning poll on the White House’s website — before alluding to the contentious recounts in Florida following the November 6 midterm elections.

“The winner of this vote was decided by a fair and open election conducted on the White House website. This was a fair election,” Trump said.

“Unfortunately, Carrots refused to concede and demanded a recount, and we’re still fighting with Carrots. And I will tell you we’ve come to a conclusion.”

“Carrots, I’m sorry to tell you the result did not change,” Trump added.

Although both Peas and Carrots have been spared from Thanksgiving dinner tables and were granted peace and rest, the president warned that “it won’t be entirely a rest.”

“Even though Peas and Carrots have received a presidential pardon, I have warned them that House Democrats are likely to issue them both subpoenas,” Trump joked, alluding to the divided Congress that has resulted from the midterm elections, with Democrats reclaiming control of the House and Republicans maintaining the Senate majority.

The incoming Democratic chairmen of key House committees have threatened to flood the president, his administration and his family business with investigations and subpoenas once they take power in January.

“Nonetheless, in the spirit of Thanksgiving, I will be issuing both Peas and Carrots a presidential pardon,” Trump said.

“Unfortunately, I can’t guarantee that your pardons won’t be enjoined by the 9th Circuit — always happens.”

Related: Trump Can Show America How to Put Partisanship Aside and Get Things ‘Done for the Country’ [1]

But after putting “all joking aside,” Trump heralded Thanksgiving week as “a time for Americans to unite together in a spirit of love, understanding, unity and joy as one very proud American family.”

The president also urged Americans to pray particularly “for those in need — especially our fellow citizens impacted by the devastating wildfires in California where I just came back [from] I’ve never seen anything like it — probably nobody has. All American hearts are joined with theirs.”

Trump met with outgoing California Gov. Jerry Brown and Governor-Elect Gavin Newsom [2] — both Democrats — on Saturday as they surveyed the fire damage in California in an unusual act of bipartisanship.

At least 79 people have died so far from the so-called Camp Fire, the most destructive wildfire in California’s history. More than 1,000 people are still missing and the wildfire has burned more than 142,000 acres of land.

The presidential turkey pardoning ceremony also allows presidents to poke fun at themselves and their political opponents in a good-natured fashion. During his first turkey pardoning last year, Trump jabbed former President Barack Obama and the two turkeys he pardoned in 2016, Tater and Tot.

Although Brown has been a frequent target of Trump’s on Twitter and vice versa, and although Newsom ran a campaign that Politico described as “the champion of California’s alternative to Trumpism,” the three men met and appeared together in a show of unity over the weekend.

The presidential turkey pardoning ceremony also allows presidents to poke fun at themselves and their political opponents in a good-natured fashion. During his first turkey pardoning last year, Trump jabbed former President Barack Obama and the two turkeys he pardoned in 2016, Tater and Tot.

“As many of you know, I’ve been very active in overturning a number of executive actions by my predecessor,” Trump said last year.

“However, I have been informed by the White House counsel’s office that Tater and Tot’s pardons cannot, under any circumstances, be revoked.”

Check out this year’s presidential turkey pardoning in the video below: