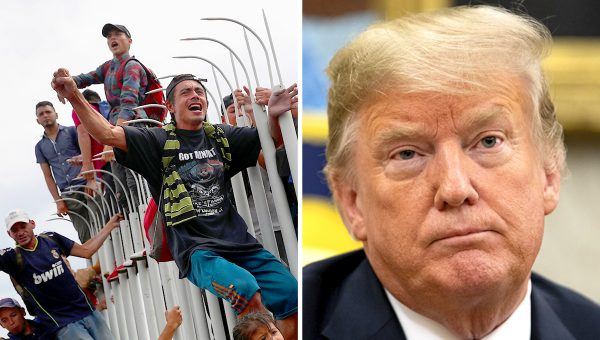 The struggle along America’s southern border is a war.

It is largely a psychological war. Foreigners are taunting the American government and trying to get the news media to focus on American law enforcement rather than the people trying to break into our country.

This struggle is historic. It is the tip of a wave of lawbreaking foreigners who would love to move into the United States and dictate to law-abiding Americans the terms under which the lawbreakers will be accepted, supported and subsidized.

Ultimately, this war is a function of willpower and cleverness.

The foreign invaders have a huge advantage. Most of the American news media and the American Left are on their side.

Most of the news media do not want to explore the aggressiveness — and in some cases criminality — of those seeking to come into the United States illegally. Nor do most news organizations want to report on the total number of people who will illegally enter the United States over the next few years if the American border control system collapses.

Most of the news media do not want to examine how many billions of dollars the Mexican cartels have made from human trafficking and assisting people to break American laws.

Nor do they want to widely report stories about law-abiding Americans who are killed or harmed by people who are in our country illegally — such as the 28-year-old 6th-grade teacher in Texas who was killed in a hit-and-run on Thanksgiving by an illegal immigrant who was out on bail from an assault charge.

Related: America’s Immigration System Is Not Supposed to Function ‘Like a Charity’ [1]

It doesn’t matter if they come from middle-class families and live in safe towns. On the Left, they are transmuted into frightened, endangered people who should receive sympathy without scrutiny.

There is an entire network of left-wing organizations dedicated to recruiting and helping people break American immigration laws.

Additionally, there are very smart left-wing activists who fully understand how to manipulate the American news media.

Many of the illegal migrants are taught to memorize key phrases, so they will meet technical requirements the Border Patrol has to follow — even if the migrants are lying.

The American people love children and value families. This has led to the creation of rules that assume that any male with a young child must be the father.

Yet, as Secretary of Homeland Security Kirstjen Nielsen pointed out in June, “In the last five months, we have a 314 percent increase in adults and children arriving at the border fraudulently, claiming to be a family unit.”

Many of the adult male-and-child groups crossing the border are not family. In a number of cases, the child is being trafficked and brought to the United States to be sold into slavery or forced into prostitution.

The Left’s own emotional commitment to blaming the American government and siding with foreigners makes it impossible for them to deal with the reality of child exploitation by traffickers who are simply lying to the border authorities.

Further, the news media’s bias makes it virtually impossible for reporters to thoroughly investigate the role of human trafficking, slavery and prostitution in funding and incentivizing the illegal flow of humans into the United States.

As you watch the struggle along the border, remember two things:

First, this is an ongoing evolutionary conflict. Every day is a snapshot. You can’t look at it in isolation.

Everyone is learning from everyone else. The leftist advisers are studying the Trump administration and advising the would-be illegal immigrants what their next steps should be.

The U.S. government is watching the illegal immigrants and is modifying tactics to try to keep smothering their efforts, keep them off balance, and block them from getting into the United States.

The future is going to be very different depending on who wins the current war on our southern border.

The news media are constantly looking for new ways to embarrass the American government and put the illegal immigrants in the best possible light to build sympathy for them.

Second, there is a huge worldwide audience watching. Every estimate of foreigners who would like to move to the United States runs into the tens of millions — and many estimates run well over 100 million.

All these people are watching and assessing their own chances of breaking the law and sneaking into the United States.

If the American government succeeds in closing down the caravans headed toward our border and blocking them from entering the United States, then these would-be immigrants may conclude they have to wait and follow the legal rules for coming to America.

The future is going to be very different depending on who wins the current war on our southern border.

Newt Gingrich is a Fox News contributor. A Republican, he was speaker of the United States House of Representatives from 1995 to 1999. Follow him on Twitter @NewtGingrich. His latest book is “Trump’s America: The Truth About Our Nation’s Great Comeback.” This Fox News [2] opinion piece is used by permission.