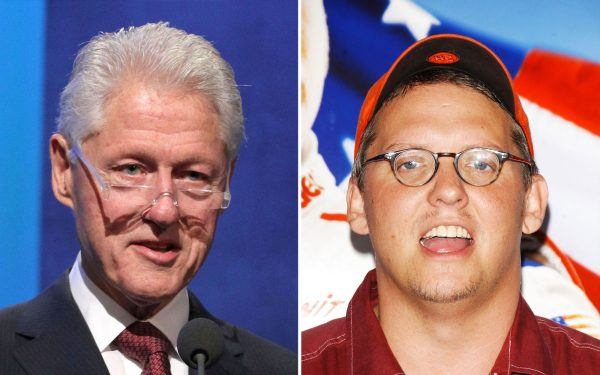 Adam McKay (pictured above right) is one of the most leftist directors in Hollywood — but check out what he had to say recently about former President Bill Clinton.

“I legitimately think Bill Clinton is one of the worst presidents in the modern age,” the “Step Brothers” filmmaker said in a recent interview with The Hollywood Reporter [1].

“I think his presidency has aged so poorly: the deregulating of the banks. His personal life, the #MeToo movement. Like, shame on all of us.”

He continued, “They let that guy off the hook. I think he killed the Democratic Party. I would say Jeb [Bush] over Bill Clinton.”

McKay’s film credits include comedies such as “The Other Guys,” “Talladega Nights: The Ballad of Ricky Bobby,” and “Anchorman: The Legend of Ron Burgundy.”

His recent efforts have turned more political. His 2015 hit “The Big Short” took place during the lead-up to the stock market crash of 2008; his latest work, “Vice,” is a look at the life of Dick Cheney, the former vice president.

McKay said that if he had a choice between George W. Bush and Dick Cheney or Donald Trump running the country, he would choose Trump.

“I would choose Trump over Bush and Cheney,” he said. “Dick Cheney was the safe cracker, the professional you brought in who knew all the ins and outs of our government. He was the ultimate gamesman.”

McKay then continued by insulting Trump — almost as if he felt he had to earn his Hollywood leftist credits back after daring to criticize a Clinton.

“With Trump, the front door to the White House is wide open,” the filmmaker said. “There’s deer and dogs and hyenas running around. And this guy is like an orangutan just throwing s*** around.”

When Donald Trump criticized Bill Clinton’s personal life and brought up the sexual misconduct allegations against him, leftist Hollywood gave him the quick cold shoulder.

With the rise of the #MeToo movement and Hillary Clinton’s loss to Trump in the 2016 presidential race, it’s likely we will see far more Hollywood leftists joining McKay and disowning the Clintons.

Remember, however, that they’re only doing this now because it is safe. When Donald Trump criticized Bill Clinton’s personal life and brought up the sexual misconduct allegations against him, leftist Hollywood gave him the quick cold shoulder.

It’s safe to join with conservatives who have long criticized the Clintons now that there is no chance Hillary will sit in the White House — and now that the #MeToo movement has exposed predators like Bill Clinton.

Check out the trailer for Adam McKay’s “Vice” below: