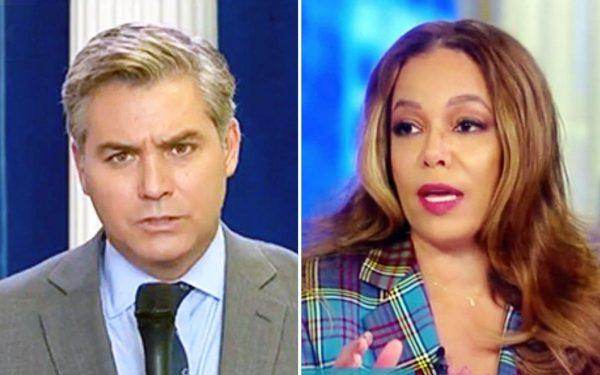 Sunny Hostin, a co-host on ABC News’ “The View, waded into the controversy surrounding the White House’s decision to revoke CNN reporter Jim Acosta’s press credentials on Thursday — and it didn’t go over well.

Hostin (shown above right) insisted the young female White House intern who attempted to take the microphone away from Acosta after President Donald Trump made clear he was moving on from that reporter was the one guilty of assault and battery.

“For me, when I saw that, I mean — I learned very early on that what I saw was battery — not by Jim Acosta, but by the young White House aid,” Hostin insisted to her co-hosts on Thursday.

“When you are holding something … and you snatch this from me, this cup is now an extension of me, and that means you’ve battered me. You’ve assaulted me.”

The White House yanked press credentials from Acosta (above left) after his controversial conduct during Wednesday’s fiery briefing.

After answering some of Acosta’s questions, Trump tried to move along to another reporter — but Acosta initially refused to give up the microphone to anyone else and continued asking questions of Trump.

“That’s enough. That’s enough … Put down the mic,” Trump snapped, adding, “CNN should be ashamed of itself [for] having you working for them. You are a rude, terrible person. You shouldn’t be working for CNN.”

But White House press secretary Sarah Sanders tweeted out a particular video, which later was revealed to have been doctored to appear worse, showing Acosta apparently swatting away the intern when she tried to take his microphone away.

“We stand by our decision to revoke this individual’s hard pass. We will not tolerate the inappropriate behavior clearly documented in this video,” Sanders tweeted.

We stand by our decision to revoke this individual’s hard pass. We will not tolerate the inappropriate behavior clearly documented in this video. pic.twitter.com/T8X1Ng912y [1]

“This conduct is absolutely unacceptable. It is also completely disrespectful to the reporter’s colleagues not to allow them an opportunity to ask a question,” Sanders wrote.

Although Sanders claimed the White House could not tolerate a reporter “placing his hands on a young woman just trying to do her job as a White House intern,” Hostin believes it was actually the intern who assaulted and battered Acosta.

Hostin, who is a lawyer, also serves as a legal correspondent and analyst for ABC News at large.

Her dubious claim caused the panelists on “The View” to explode as they argued over each other.

“So you’re blaming the woman in this situation for doing her job?” co-host Abby Huntsman demanded.

Co-host Meghan McCain vehemently objected to Hostin’s claim, incredulously asking her if she really thought the intern “should be arrested for battery.”

“I’m telling you what the law is,” Hostin insisted.

After the co-hosts talked over each other for what seemed forever, Hostin finally regained the conversation.

“I think what’s terrible is that the White House, through the press secretary, sent out an edited, doctored video fast-forwarding what we just saw that tried to imply that he assaulted her. So that’s coming from the White House and that’s really despicable,” Hostin said.

Earlier on in the conversation, McCain had argued that while Acosta did not assault the intern, it was “inappropriate for a journalist to be doing that to a White House aide.”

Co-host Joy Behar disagreed, saying, “I thought he just took his mic back.”

“The way I saw just it, he pushed her arm away,” McCain argued.

“Well, she shouldn’t have touched him, maybe,” Behar said.

For all of you who need a legal lesson on assault/battery – “To constitute an assault and battery, knocking or snatching anything from plaintiff's hand or touching anything connected with his person … is sufficient." #schoolisinsession [4] https://t.co/RVwy0jqDuA [5]

For his part, Acosta insisted on Wednesday on CNN that he never touched the intern.

But the undoctored videos show otherwise.

“Obviously, you know, I didn’t put my hands on her or touch her, as they are alleging. And it’s just unfortunate that the White House is saying this,” Acosta lamented to anchor Anderson Cooper.

An exasperated McCain, on “The View,” said, “Jim Acosta is always the story … I’m sick of him being the story. I’m sick of talking about Jim Acosta. And in that moment I thought that he was grandstanding.”