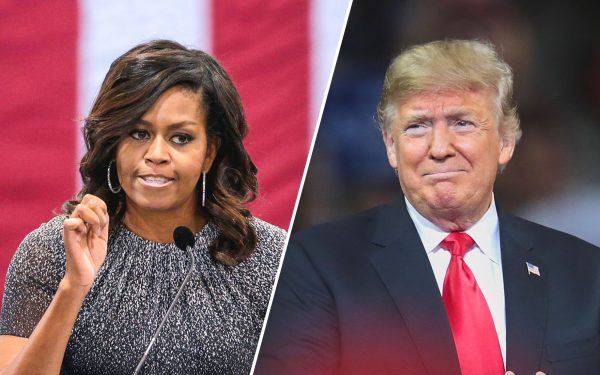 “We were now up against a bully … challenging the dignity of our country with practically his every utterance,” Obama read from her soon-to-be-released memoir, “Becoming,” for the interview.

“The vibrant diversity of the two previous inaugurations was gone … Realizing it, I made my own optic adjustment: I stopped even trying to smile,” she also read.

Related: Michelle Obama Rips Donald Trump in New Book — Of Course She Does [1]

On Monday morning’s edition of ABC’s “Good Morning America,” during which Roberts discussed the interview in some depth, she highlighted segments from the interview that included the Obamas’ infertility challenges and marital struggles.

When Roberts suggested some people believe the “seed of discontent that led to Donald Trump being elected president” emerged during Barack Obama’s presidency, Michelle Obama declined to address it, saying it would require speculation and that “we’re gonna have to figure that out as a nation.”

Also from the book, interviewer Robin Roberts read these words from the former first lady on the outcome of the 2016 presidential election: “I will always wonder about what led so many, women in particular, to reject an exceptionally qualified female candidate and instead choose a misogynist as their president.”

Obama showed some restraint in her comments on fellow first lady Melania Trump.

“You know, one of the things you learn as a former, it’s, like, I don’t judge, what a current is doin’, you know? So I’d prefer not to, you know, speak on what she’s doing versus what I did because I think every first lady approaches this job differently,” said Obama.

She did add, however, that though she had offered to help Melania Trump, should she request it, the current first lady had not reached out to her.

Michelle Obama will be enjoying plenty of other mainstream media coverage for this book — she’ll do a live appearance on ABC’s “Good America” on Tuesday.

Later in the day, she will appear at Chicago’s United Center (to kick off her nationwide tour) with Oprah Winfrey, who has already endorsed the book and raved about it endlessly.

Why do we care about Michelle Obama’s book? The pre-lease publicity is focused on her trashing Trump. And that’s why the Democrat media is hyperventilating over it. I’ll pass. https://t.co/CyC06KzMDf [3]

Why would Melania reach out to a woman who has bad-mouthed her husband for 2.5 years?