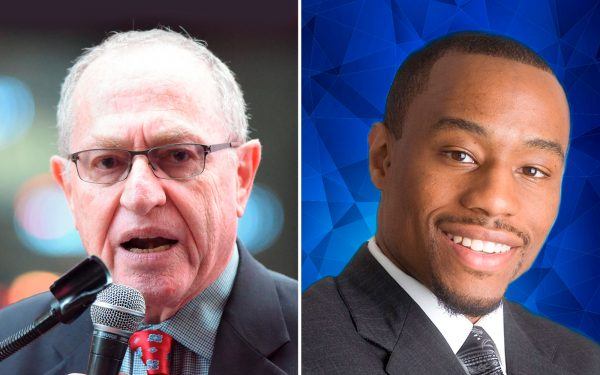 Professor Marc Lamont Hill, who had been a CNN contributor up until yesterday, is now “no longer under contract” with the news outlet after he called for a “free Palestine from river to the sea” at the United Nations on Wednesday.

But Hill is still employed by Temple University in Philadelphia, the school confirmed to Campus Reform [1] on Thursday. Campus Reform shared that news exclusively [1] on its site.

Hill, 39 (shown above right), is a professor of media studies and urban education at Temple in Philadelphia, where he was born.

On Wednesday during a highly controversial and widely condemned speech at the U.N., Hill discussed boycotting Israel to support and “free” Palestine.

On Thursday morning on “The Laura Ingraham Show,” Alan Dershowitz, professor emeritus at Harvard Law School, slammed Hill’s remarks, calling him “an absolute bigot, anti-Semite, un-American, anti-American [2]. He’s just a despicable human being who has now gone beyond the point of acceptability for any network in the United States.”

Dershowitz (above left), who is Jewish, had debated Hill previously on CNN.

In Hill’s remarks, he appeared to call for the destruction of Israel as a sovereign entity.

“We have an opportunity to not just offer solidarity in words but to commit to political action, grassroots action, local action and international action that will give us what justice requires and that is a free Palestine from the river to the sea,” Hill said at the U.N.

CNN on Thursday said Hill was “no longer under contract with CNN,” as Mediaite reported.

“He [Hill] has advocated the killing of Jews. He has advocated violence,” Dershowitz declared early on Thursday [2], before the news of CNN’s firing broke.

“He has said it is OK for Palestinians to blow up pizza parlors, to blow up buses, to kill mothers and children, and he has also said that the only nation-state of the Jewish people should no longer be allowed to survive.”

“There’s no way that he should be allowed to be a commentator [6] on any kind of network,” Dershowitz also declared, calling Hill “the David Duke of the hard-Left on anti-Israel groups.”

“The greatest dangers of anti-Semitism today, because they involve the future, are what’s going on on college campuses from the hard, hard, hard-Left,” Dershowitz added.

“With his racist views and unabashed denigration of Israel, Dr. Hill does not deserve to be given any sort of platform that facilitates the dissemination of his bigotry, whether it be on Cable TV or in a classroom,” the NCYI declared. “With such hate-filled views that are antithetical to basic human decency, Marc Lamont Hill should not be rewarded by serving as a pundit or a professor, and both CNN and Temple have a duty to dismiss Dr. Hill and renounce his anti-Semitic beliefs,” it also said.

“Marc Lamont Hill has been quoted extensively over the last 24 hours,” Assistant Strategic Communications Dean Shannon McLaughlin Rooney of Temple University told Campus Reform [1] on Thursday. “Marc Lamont Hill does not represent Temple University and his views are his own. However, we acknowledge that he has a constitutionally protected right to express his opinion as a private citizen.”

Hill, on his Twitter feed, attempted to clarify his remarks.

See a few of his tweets below.

This isn’t a case of throwing rocks and hiding hands. I genuinely believe in the arguments and principles that I shared in the speech. I also genuinely want peace, freedom, and security for everyone. These are not competing ideals and values.

My reference to “river to the sea” was not a call to destroy anything or anyone. It was a call for justice, both in Israel and in the West Bank/Gaza. The speech very clearly and specifically said those things. No amount of debate will change what I actually said or what I meant.

I concluded my remarks with a call to free Palestine from river to sea. This means that all areas of historic Palestine —e.g., West Bank, Gaza, Israel— must be spaces of freedom, safety, and peace for Palestinians.

Share your thoughts below — and check out this clip from Hill’s reprehensible U.N. remarks on Wednesday: