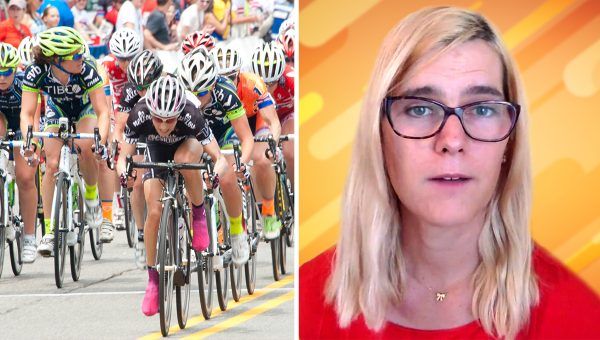 Men are taking over women’s athletics. From wrestling to weightlifting to boxing, biological males are competing against females … and winning.

A biological man who identifies as transgender won [1] a women’s world championship cycling event this past Sunday. Under the name “Rachel McKinnon,” the cyclist won the women’s 2018 UCI Masters Track Cycling World Championships in the 35-39 age bracket.

Critics warn that allowing biological males to play on the team of their choice could destroy women’s sports. Males have more testosterone, which gives them advantages in greater bone density and muscular strength.

Yet trans policies negatively affect women’s rights at a deeper level as well, by imposing the postmodern dogma that biological sex is not a scientific fact but a social construct. The implication? It becomes impossible to argue for rights based on the sheer fact of being female.

So much for women’s rights.

To most people, it’s evident that the sexual facts of life are straightforward science. But who needs science? As Judith Butler [3], an influential postmodern gender theorist, writes, “This construct called ‘sex’ is as culturally constructed as gender.”

Transgender activist Chase Strangio reduces [4] gender to sheer choice: “It is a choice to refer to some bodies as male and some bodies as female, not a fact … It is an ideological position — and not a scientific fact.”

Apparently, for transgender activists, saying “it’s a girl” is just as much a social construct as saying “girls wear pink.”

The Human Rights Campaign, a homosexual activist group, defines [5] gender as “how individuals perceive themselves and what they call themselves.” That is, we simply declare our gender identity. You are whatever you say you are. Language takes priority over biology.

At the same time, transgender activists work to erase the word “woman” when applied to female biological functions. The Midwives Alliance of North America changed their literature to delete the word “expectant mother” and substitute “pregnant individuals,” arguing that transgender males (whose female anatomy is still intact) can get pregnant.

A children’s coloring book [6] titled “The Adventures of Toni the Tampon” tells young children that men as well as women are capable of menstruating. Anyone who protests this targeted assault on the term “woman” is denounced as a TERF (Trans Exclusionary Radical Feminist).

Mary Lou Singleton of the Women’s Liberation Front says, [7] “My entire life work is fighting for the class of people who are oppressed on the basis of their biological sex,” including atrocities like forced child marriage, infanticide of baby girls, and female genital mutilation [8]. But it is now deemed transphobic even to label these victims women and girls. Singleton also says, “What we are seeing is the legal erasure of the material reality of sex.”

We cannot legally protect a category of people if we cannot identify that category.

In this election season, both Left and Right are pushing trans issues. On the Left, in Vermont, Christine Hallquist is the first openly transgender nominee [9] for governor.

On the Right, a national security analyst with the American Enterprise Institute recently changed his name from Thomas Donnelly to Giselle [10]. AEI President Arthur Brooks and Vice President for Foreign Policy Danielle Pletka expressed support for Donnelly’s new identity as Giselle: “We are proud that she is part of the AEI family.”

The fact that Thomas’s transition has been embraced by leaders of one of the most influential right-of-center think tanks in the nation’s capital sends a powerful signal [11] that the rest of conservative Washington is now expected to disregard biological facts and get on board with the idea that it’s okay for a man to appropriate the label “woman.”

From sports to politics and everywhere in between, biological males are competing against females … and winning.

Nancy Pearcey is professor and scholar in residence at Houston Baptist University and editor at large of the Pearcey Report. [12] This article draws from her recently published book, “Love Thy Body: Answering Hard Questions about Life and Sexuality.” [13]