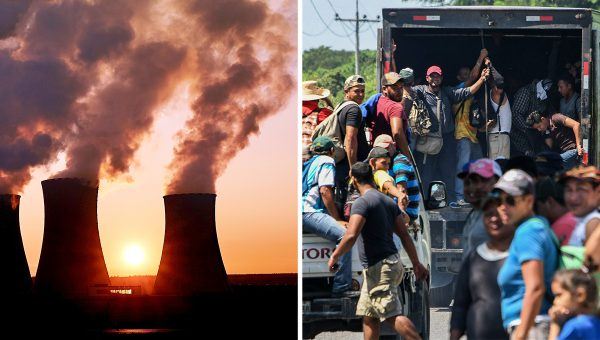 United Nations officials made front-page news recently, issuing a report claiming the purported consequences of climate change in the coming years will be more dire than previously estimated.

The report chiefly blamed increased greenhouse gas emissions for a rise in global temperatures and warned that transforming the world economy on an unprecedented scale will be required to avoid catastrophe.

Compiled by over 90 authors from 40 countries, the report also details the effects of climate change on migrants. Nowhere to be found in the report, however, is the problem whose name apparently must not be spoken: the destructive impact of mass migration on the environment.

For reasons presumably tied to conflicting political agendas, few governmental organizations are willing to admit that mass migration is harmful to the environment. The research we have on this topic is damning.

Quite simply, immigration-generated population growth is fueling an increase in energy demand and the waste product that accompanies it. Immigrants to the United States alone produce about four times more CO2 in the United States as they would have in their countries of origin.

U.S. immigrants produce an estimated 637 million metric tons of CO2 emissions annually — equal to Great Britain and Sweden combined. Strangely, governments that stress the urgency of addressing climate change are also some of the biggest opponents of border enforcement and immigration limits.

Related: Pact Emerging on How to Deal with Migrant Caravan [1]

One of the most popular talking points of climate change advocates is that the United States has less than 5 percent of the world’s population, yet consumes about a quarter of the world’s fossil fuel resources.

If that is true, then why do some of the same people support immigration policies that significantly increase American fuel consumption as well as its carbon footprint? The two positions are wildly inconsistent.

The U.N. is among the worst practitioners of this hypocrisy. While issuing apocalyptic warnings about climate change, the U.N. simultaneously encourages countries to accept even more migrants.

This recently caused Poland’s interior minister to recommend that his country quit the U.N.’s Global Compact for Safe, Orderly and Regular Migration because it may encourage more illegal alien arrivals and is not in the interests of the host country. Hungary has announced it will not sign up for the pact, and the United States pulled out last year.

The environmental damage from mass migration extends beyond just increased CO2 output. The land around our southern border is riddled with trash, and it is directly proportional to the numbers of those who make the perilous journey to enter our country illegally.

How much trash? According to the Arizona Department of Environmental Quality, in fiscal years 2011 and 2012, when Arizona was experiencing over 120,000 border apprehensions, over 65,000 pounds of border trash was being collected annually.

That’s more than 32 tons of garbage — plastic water bottles, abandoned vehicles, human waste, medical products, and much more — on the ground. In the following years, as apprehensions fell as low as 70,000, border trash collections dropped as well – reaching a low of just 19,000 pounds in fiscal year 2015 before jumping back up in 2016.

“For committed environmentalists, this should be a five-alarm crisis demanding immediate action. Curiously, it is not. With this kind of pollution caused by mass migration, surely our federal government is on the case. That assumption would be wrong.”

Keep in mind that this is only one of four southern border states, and not even the largest. The impact of this scale of pollution includes watershed degradation, soil erosion, damage to infrastructure, loss of vegetation and wildlife, and escaped campfires.

For committed environmentalists, this should be a five-alarm crisis demanding immediate action. Curiously, it is not. With this kind of pollution caused by mass migration, surely our federal government is on the case. That assumption would be wrong.

Since it became law nearly a half century ago, NEPA has required any agency, before implementing actions or programs that will affect the environment, to issue an environmental impact statement analyzing and publicizing those effects.

The federal government’s immigration programs are probably the most environmentally consequential programs there are, yet no such analysis has ever been done.

Regardless where one stands on the controversial issue of climate change, those who advance it as a high-priority issue have an obligation to be transparent about all of its contributing factors.

Brian Lonergan is director of communications at the Immigration Reform Law Institute, a public interest law firm working to defend the rights and interests of the American people from the negative effects of mass migration.