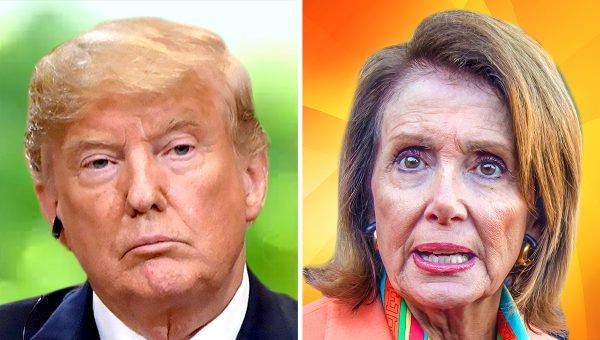 With exactly two weeks to go before Election Day, the currents running against the Republicans are so strong that most experts agree the question is not whether Democrats will make gains — but how big they will be.

This is particularly true in races for the House of Representatives. Although Republicans are holding their own in the struggle for control of the Senate, the party is fighting an uphill battle to maintain the House majority won in the 2010 Tea Party uprising.

“There’s tremendous spirit, maybe like I’ve never seen other than in ’16 … I have never seen spirit like the spirit that we have right now except the week before the race — the presidential race — two years ago,” he told reporters just before leaving for the rally in Texas. “I think the Republicans are going to do very nicely.”

If Trump manages to deliver victory for his party, he will defy a lot of history.

Pick your measure. Whether it’s historical experience, polls, money or incumbency, everything suggests voters are about to wallop the GOP.

Here are six reasons why Republicans should be worried as the midterms approach:

1.) History favors the party out of the White House. Since the end of World War II, the president’s party has lost seats in all but two midterm elections.

Those two aberrational years were 1998, when voters were disgusted by what they regarded as Republican overreach in impeaching then-President Bill Clinton; and in 2002, when then-President George W. Bush saw his party gain seats in the afterglow of the 9/11 attacks.

In the other 16 elections, the president’s party has lost an average of almost 29 seats.

Even scoring the average result would be enough to make House Minority Leader Nancy Pelosi (D-Calif., pictured above right) the next speaker of the House.

2.) President Donald Trump’s approval rating is low. When parties have overcome or mitigated the historical trends, it has tended to be when the president was riding high in the polls. Bush in 2002 enjoyed an approval rating of 67 percent in late October, according to The American Presidency Project.

Likewise, Clinton was broadly popular in late October 1998. His approval rating was 65 percent.

That is bad news for Republicans if past is prologue. Although Trump’s approval rating has improved over the past couple of weeks, his current RealClearPolitics average is 44.2 percent — with an average disapproval of 51.9 percent. That puts him near the line that often divides massive losses for the president’s party from modest ones.

3.) Republicans are defending many more open seats. Republicans have twice as many House seats with no incumbent. In all, 38 Republican incumbents retired or sought higher office. Two other incumbents lost primary challenges, for a total of 40 open seats.

Democrats, meanwhile, have 18 incumbents who are not running for re-election, plus two who lost primary challenges, for a total of 20 open seats.

This matters because, all things being equal, incumbents enjoy an enormous advantage. The party out of power has a better shot of winning when the incumbent is gone.

Of course, where the open seat races are matters more than the numbers. The departure of Rep. Trey Gowdy (R-S.C.), whose district went for Trump by almost 26 points, presents much less of a risk than the retirement of Rep. Ileana Ros-Lehtinen (R-Fla.), who represents a district Trump lost by almost 20 points.

Several other open seats held by Republicans come in districts that Trump won only narrowly.

4.) Democrats are winning the money race. Raising the most money obviously is no guarantee of victory. See Clinton, Hillary Rodham, in 2016.

All things considered, though, any candidate would rather have more money than less.

In many races, Democratic challengers actually have raised more money than their Republican incumbents — a highly unusual situation that could mitigate the advantage of incumbency.

Campaign fundraising can be a reliable predictor in political raises for two reasons. First and obvious is that candidates who raise more money have a greater ability to buy campaign ads and spend on efforts to get out the vote.

5.) The polls favor Democrats. Since Trump took office, Democrats consistently have led on the so-called generic ballot, with which pollsters ask which party voters want to control Congress. The current RealClearPolitics average favors Democrats by 7.7 points.

Winning the national popular vote is no guarantee of flipping enough seats to win control of the House. But if the Democrats’ share of the two-party vote matches that 7.7 polling average, it could spell trouble for the GOP.

In 10 midterm elections since 1946 in which a party won the two-party vote by at least 7 points, the average gain in seats has been more than 29.

A glimmer of hope for Republicans is that Democrats tend to gain fewer seats from getting the most votes nationally because gerrymandering and natural housing patterns tend to concentrate their vote. A version of that fact allowed Trump to defeat Clinton in the Electoral College even though he lost the popular vote.

Still, it’s hard to imagine Republicans avoiding losses if they do not close that polling gap in the next two weeks.

6.) Democrats have outperformed Republicans in special elections. It is foolish to make too much of any single special election given their unusual nature — standing alone, not on a normal election day and featuring low turnout.

But a definite trend has emerged from the accumulation of results since Trump’s presidency started. Democrats won a House of Representatives seat in Pennsylvania in a district that Trump had won by nearly 20 points and came close in several other overwhelmingly Republican districts.

And it’s not just at the federal level. Democrats have swept most of the special elections that have taken place in legislative races over the past couple of years. Although there have been outliers, such as a Republican upset [2] in a Texas state Senate district that has been in Democratic hands for 139 years, Democrats enjoyed most of the success.

In races for governor, Congress and state legislative seats since the 2016 election — including regular and special elections — Democrats have flipped 46 offices previously held by Republicans. Meanwhile, Republicans have snatched only eight seats held by Democrats.