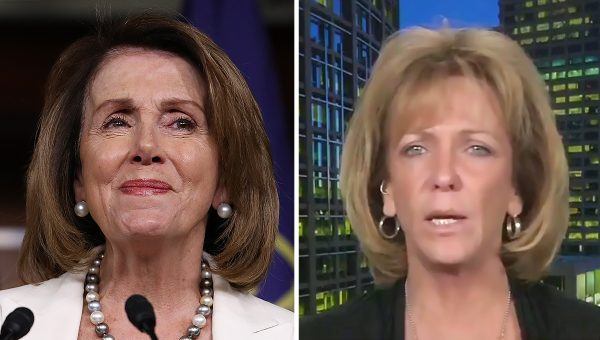 Mendoza’s son, law enforcement officer Sgt. Brandon Mendoza, died after an intoxicated illegal immigrant ran into his police car in 2014. Mendoza said Thursday it was “laughable” that Pelosi answered a question about the border wall by knocking the president, as The Daily Caller reported [1].

“Every time Nancy Pelosi opens her mouth it’s just a laugh, because she’s so out of touch with reality that that’s the opportunity she took with a Harvard student to answer a serious national security question about our southern border being secure — she took another jab at our president,” Mendoza said.

Pelosi was asked about the wall during a recent visit to the Harvard Institute of Politics and said flippantly, “It happens to be like a manhood issue for the president, and I’m not interested in that.”

Mendoza criticized any and all politicians who do not take border security seriously.

“We have the right to protect the citizens of this country, and if we have elected officials who are not going to work with our president and get the funds necessary to put a wall, because these people will continue finding a way to get over our poor southern border, we have got to get strong and get serious,” Mendoza said.

Mendoza was part of a group of angel parents invited to the White House [2] last June by President Trump, who has consistently listened to their stories even though the mainstream media show little interest in highlighting their devastating losses at the hands of illegals.

The president said at the time that he invited the families to the White House “because the news media has overlooked their stories.”

President Trump is currently dealing with [3] a new wave of migrants now traveling through Mexico and headed for the U.S., tweeting early Thursday morning that he will send troops to close the border if Mexico lets the latest caravan of thousands of migrants marching north reach the boundary between the two nations.

Related: They’re Back: New ‘March of the Migrant’ Hondurans Headed to U.S. [4]

“The assault on our country at our Southern Border, including the Criminal elements and DRUGS pouring in, is far more important to me, as President, than Trade or the USMCA. Hopefully Mexico will stop this onslaught at their Northern Border. All Democrats fault for weak laws!” Trump said in the first of a series of impassioned tweets on the growing crisis.

….The assault on our country at our Southern Border, including the Criminal elements and DRUGS pouring in, is far more important to me, as President, than Trade or the USMCA. Hopefully Mexico will stop this onslaught at their Northern Border. All Democrats fault for weak laws!

….In addition to stopping all payments to these countries, which seem to have almost no control over their population, I must, in the strongest of terms, ask Mexico to stop this onslaught – and if unable to do so I will call up the U.S. Military and CLOSE OUR SOUTHERN BORDER!..

See Mendoza’s comments in the video below.