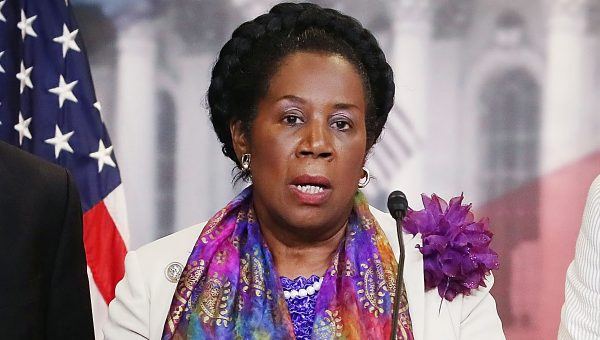 A Democratic staffer on Capitol Hill has been charged with posting private identifying information about Republican senators on the internet.

The Capitol Police identified the defendant as Jackson A. Cosko, 27.

He stands accused of five different federal offenses related to the practice known as “doxing.”

Cosko is an intern for Rep. Sheila Jackson Lee (D-Texas, pictured above), according to Fox News [1]. The network reported that he previously had worked with Sen. Maggie Hassan (D-N.H.) and former Sen. Barbara Boxer (D-Calif.).

Fox reported that the personal information of Sens. Lindsey Graham (R-S.C.), Mike Lee (R-Utah), and Orrin Hatch (R-Utah) had been posted on their Wikipedia and Senate Judiciary Committee pages while they were questioning Supreme Court nominee Brett Kavanaugh last week.

The information included the senators’ home addresses and phone numbers, although the phone numbers might not have been accurate.

Jackson Lee angrily denied last week that anyone in her office was involved.

“Lies, lies, and more despicable lies,” she said in a statement issued on Saturday.

“I am utterly disgusted by the spread of the completely false, absurd and dangerous lies and conspiracy theories that are being peddled by ultra-right-wing pundits, outlets, and websites who are promoting a fraudulent claim that a member of my staff was responsible for the release of the personal information of members of the United States Senate on Wikipedia. This unfounded allegation is completely false and an absolute lie.”

“Lies, lies, and more despicable lies,” Jackson Lee said in a statement issued on Saturday. “I am utterly disgusted by the spread of the completely false, absurd and dangerous lies and conspiracy theories …”

Glenn Rushing, the congresswoman’s chief of staff, was more contrite on Wednesday.

“It’s unfortunate,” he told Fox News, adding that the office is “cooperating with law enforcement.”

The Hill reported that the doxing came to light when @congressedits, a Twitter account that automatically tweets edits made to Wikipedia pages from congressional computers, tweeted the information. The Twitter account was subsequently suspended for posting personal information, according to that newspaper.

The arrest also comes when the partisan divide in Washington is at its sharpest edge in decades. Officials in President Donald Trump’s administration and GOP elected officials frequently have been harassed at restaurants and other public places.

Kavanaugh’s confirmation, marred by allegations that he committed sexual assaults as a teenager, has been one of the most contentious in American history. Even so, the nomination now appears headed for a final vote, as Senate Majority Leader Mitch McConnell (R-Ky.) announced late Wednesday that he has filed the parliamentary motion needed to commence the Senate floor debate. The final up-or-down vote could be taken as early as Saturday.