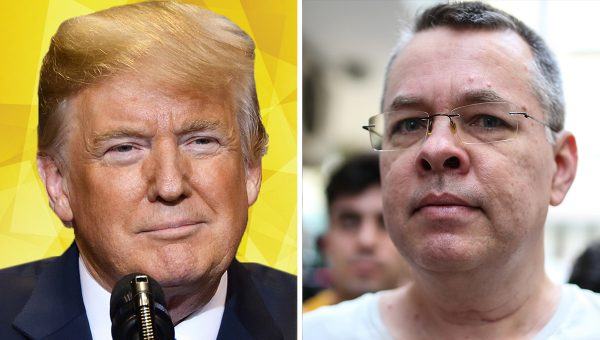 U.S. evangelical pastor Andrew Brunson (pictured above right) has been freed two years after he was imprisoned in Turkey over allegations he was helping to plot a coup against Turkey’s President Recep Tayyip Erdoğan, The New York Times [1] and other outlets are reporting.

Before the judge’s ruling, Pastor Brunson is reported [2] to have told the court, “I am an innocent man. I love Jesus. I love Turkey.”

The Trump administration worked hard for the release of the evangelical pastor, who is originally from North Carolina.

“The Trump administration had pressed hard for the release of Mr. Brunson, an evangelical pastor who runs the small Resurrection Church in Izmir,” reported [1] The Times of the release.

He was one of two dozen Americans “detained in the aftermath of a failed coup in 2016,” noted that publication, and was charged with “aiding terrorist groups and espionage, charges he denies.”

Evangelical leader Franklin Graham tweeted, “We thank God for the long-awaited release of Pastor Andrew Brunson. I know that his family & friends are anxious to welcome him home. Our thanks to @POTUS & @VP​ for their hard work on this issue — it wouldn’t have happened without them.”

We thank God for the long-awaited release of Pastor Andrew Brunson. I know that his family & friends are anxious to welcome him home. Our thanks to @POTUS [3] & @VP [4]​ for their hard work on this issue—it wouldn't have happened without them. https://t.co/UjM2VTbQIu [5]

Dr. Robert Jeffress, pastor of the 13,000-member First Baptist Church of Dallas, issued the following statement in response to Turkey’s decision in response to American pressure to free Pastor Andrew Brunson: “I join all Americans in sincere thanks to President Donald J. Trump and his administration for their relentless dedication to religious freedom and tough negotiations with Turkey to secure Pastor Brunson’s release today. Yet another example of ‘promise made, promise kept’ by the Trump administration. Praise God!”

In July, after nearly two years in prison, Brunson was moved to house arrest, according to the U.K.’s The Independent [2].

“His house arrest and ban on leaving the country has also been lifted,” the privately owned NTV news channel reported; this paves the way for the 50-year-old to return to the United States.

A Turkish court originally handed down a sentence of three years and one month in prison for the pastor, based on charges related to terrorism and espionage — “but [it] suspended the rest of his jail time based on his time already served,” noted The Independent.

Related: A Tale of Two Turkeys: Erdoğan vs. Atatürk [8]

Turkish authorities accused Brunson of having links to the Kurdistan Workers Party (PKK) and the Gulenist movement, said the BBC [9], which Turkey blames for a failed coup in 2016.

Brunson also faced up to 35 years in jail on charges of espionage.

The pastor, who had lived in Turkey for more than 20 years, preached in Izmir [2], a city on Turkey’s Aegean coast close to the locations of some of Christianity’s first communities.

President Donald Trump reacted to the release on Twitter, saying, “My thoughts and prayers are with Pastor Brunson, and we hope to have him safely back home soon!”

My thoughts and prayers are with Pastor Brunson, and we hope to have him safely back home soon!

This was followed soon after with a message from the president in all caps that appeared to confirm the information: “Pastor Brunson just released. Will be home soon!”

Others weighed in on the happy news as well.

President Trump, I know the media won’t give you any credit, but I’d like to thank you for facilitating the release of Pastor Brunson from a Turkish jail.
Right on Sir!!

RT @USUN [13] Many prayers answered for the family of Pastor Brunson and for all Americans today. Welcome home, Pastor…you’ve been missed! After an unjust imprisonment in Turkey for 2 years, we can all breathe a sigh of relief. ❤️🇺🇸 #PrayersAnswered [14] #USStrong [15] https://t.co/s6wzpgsezF [16]

See more in the video below.