Oldest Weapons in North America Found in This State

In a 'significant' discovery, archeologists unearthed items that may date back 15,500 years — experts say they were used to hunt game

Image Credit: Center for the Study of the First Americans, Texas A&M University

Researchers as Texas A&M University have discovered weapons under sediment that they predict could be upwards of 15,500 years old.

The weapons, which included spearheads crafted from chert — a dark, opaque rock — were excavated some 40 miles northwest of Austin, Texas, at the Debra L. Friedkin dig site.

After over a decade of searching for artifacts at this particular site, archeologists now believe these are the oldest weapons ever found in North America.

The artifacts were discovered mere feet below the surface. They grant modern humanity a new glimpse into its past.

Michael Waters, anthropology professor and director of the Center for the Study of the First Americans at Texas A&M, said the 3- to 4-inch spearheads were constructed to hunt game in what is now Austin.

“The discovery is significant because almost all pre-Clovis sites have stone tools, but spear points have yet to be found. These points were found under a layer with Clovis and Folsom projectile points,” noted Waters (shown above right) on Wednesday in a statement, as Fox News and other outlets also reported.

Clovis is a term used to define the Paleo-Indian culture of North and Central America.

Waters continued, “The dream has always been to find diagnostic artifacts — such as projectile points — that can be recognized as older than Clovis, and this is what we have at the Friedkin site.”

The so-called Clovis people conceived the “Clovis point,” a type of spear previously discovered in parts of the United States and also in Mexico. 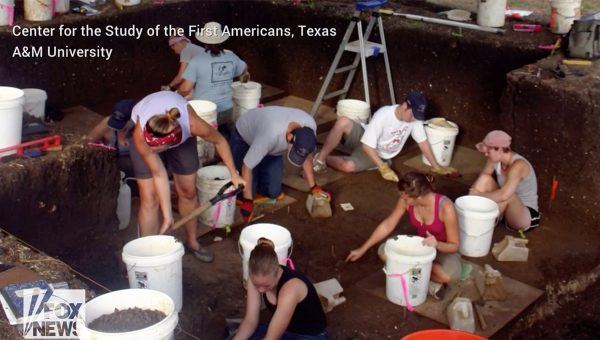 Image Credit: Center for the Study of the First Americans, Texas A&M University

The discovery is key because this population – previously thought to have been the first to set foot on the continent — is thought to have existed some 13,000 years ago.

The recent uncovering of the tools, however, provides further evidence to supplement recent research that humans arrived in North America thousands of years earlier than previously thought.

Although thrilled with his team’s findings, Waters acknowledged there is still much more research to be done concerning the tools in pursuit of heightened insight into early North America and its inhabitants.

“The findings expand our understanding of the earliest people to explore and settle North America. The peopling of the Americas during the end of the last Ice Age was a complex process, and this complexity is seen in their genetic record. Now, we are starting to see this complexity mirrored in the archaeological record,” concluded Waters in his statement.

The team includes staff from Baylor University and the University of Texas.